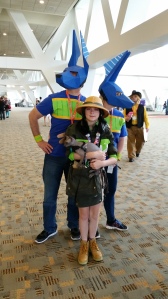 Daring Do is Best Cosplay Pony

Day two, and as any ‘con goer knows, this is the big day.  Folks are usually off work and/or school, and have nothing going on the next day.  So let’s party!  The cosplayers were spectacular, so much so that I’ll do a separate All Cos All The Time slideshow post tomorrow.  Let’s get started, shall we?

* The “Best Saturday Cosplay” Award: Daring Do, who not only had two Anubis-like creatures on a leash, but was holding a Sphinx.  (I got to pet the kitty.  I had to pull myself away, because those kitties?  Like velvet y’all.  Too adorbs.)

* The “Best Acting Tip/Life Advice” Award: “Do something, and let it go.”  – Kelly Sheridan

* The “Best Breakfast Idea I Wish I’d Thought To Have” Award: John de Lancie’s bagels and lox.  Note to self; buy smoked salmon. 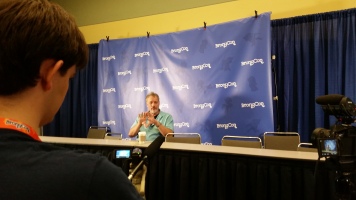 re: similarities in MLPFiM and Star Trek – with MLPFiM cons/fandom, there’s a “tent that they can come to find community…which is exactly what happened in ’65 [with the original Star Trek].”

re: his richest experiences with MLPFiM – the experience of the fans affects him far more than the show itself. “Far more.”

re: new stuff on his plate – he’s in the process of working on Disruptor Beam’s new game, Starcraft.  “Q has screwed things up again.” That sounds…like it’s gonna be sweet.

re: William Shatner in MLPFiM – he wasn’t absolutely sure about this, but did say that “Bill’s always interested in just about anything.”  Fingers crossed!

re: any tidbits on the future of Dischord – “I don’t tend to know these things in advance.”  Which echoes other voice actors comments; seems that the actors get scripts about a week in advance.

I wish I’d been able to ask him about the possibility of working with Arleen Sorkin in an ep of MLPFiM.  They were both great on Days of Our Lives, and they’ve both gone on to voice popular trixters in popular animated series (Arleen’s Harley Quinn on Batman: The Animated Series is amazing.)  Hearing those two together, even if it was just a cameo, would have me bouncing.  Ah well, I can always dream…

re: Barbie vs MLPFiM – she’s “impressed with the majority of the Barbie movies…she’s the hero of her own story, always saves the day…kind, clever and brave.”  MLPFiM is “a different vehicle, more of an ensemble show.”  Both shows “have a moral/lesson” to tell.

re: the first toy she ever bought with her own money – a mint-green 80s era MLP that she bought when she was a kid.  Fore-shadow!

re: changes in MLPFiM from season to season – as the seasons continue, shows are “more nuanced, more adult“; the older ones were a lot more “spelling out” of themes and storylines so little ones could keep up.

re: thinking about character motivation while she’s acting – “when you’re recording it, you have very little time.” Instead, Sheridan tends to focus on “how [the character is] responding“, as “dissect as you do it” approach can negatively affect a performance.  “Stay in the moment.”

re: more Starlight Glimmer on the show – the powers-that-be “keep it pretty close…keep your fingers crossed!” 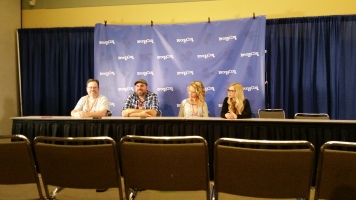 re: freedom to follow their own vision – they’re pretty much “off the leash” and aren’t really bound by a book of rules.  That said, there are times when something that was okay once isn’t okay now (or vice versa).

re: variant covers – Fleecs tends to stay away from “super referential” covers. But background details?  The artists say bring it on!  “I do it to entertain me…it’s for me to go play.” Tidbit: the “Donald Sutherland Invasion of the Body Snatchers” reference?  The Hasbro rep saw it and loved it.  And yes, there’s a Hasbro rep that “scours” the issues.

re: writers coming up with ideas outside of Hasbro/MLPFiM show stories – Nuhfer says writers come up with ideas, and sometimes their boss asks them to pitch ideas.  However, there may be some overlap sometimes, or a comics writer may pitch an idea that has already been scripted, so the comic writers go back to the drawing (idea?) board.  Example?  “Rarity Takes Mane-hattan”.

re: getting to peek at show stuff in advance – sometimes that’ll happen.  For example, if a comics artist is setting a scene in the Equestria Girls music room, that artist needs to know what the music room actually looks like.  So they’ll get a gander. Nutshell?  In terms of setting, yes.

re: MLPFiM the comic going darker than MLPFiM the show – “I think they’re already letting us go darker.”  And then they mentioned many instances where comics/animated movies and shows have covered darker topics (Bambi’s mom, anyone?)  But Garbowska added “they don’t go past the point of no return.”

re: best part of working on MLPFiM – Price says  the “best thing in the world to me is meeting the kids.”  The rest of the crew agreed.

re: people that think you need to “talk down” to kids – Kids at shows typically point to the rows of comics at Artist Alley and say “I want the scary one!” “Two different levels that blend together…it does not talk down to kids.”

re: MLPFiM comics; all-ages or geared-to kids – “We really want to make an all ages book.”  “I don’t know at what point in our lives we forget how bold and adventurous [kids are].”

re: getting work after the success of MLPFiM – “It’s easier to get work, but it’s harder to get work that isn’t all-ages.”

Off to the ‘con for Sunday Funday — be back tomorrow with more BronyCon stuff!

Professional nerd. Lover of licorice.
View all posts by Denise →
This entry was posted in Convention-al, Pony News and tagged BronyCon. Bookmark the permalink.