“The Jungle Book” breathes new life into an animated classic 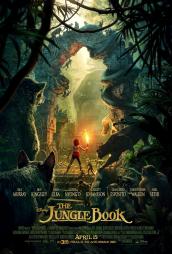 Nutshell: astounding CGI, motion capture and first-class voice acting breathes new life into this live-action remake of Disney’s animated classic.  Much darker than the original, The Jungle Book is nonetheless entertaining, blending touching moments with action that will keep kids of all ages on the edge of their seats.  Young actor Neel Sethi is wonderfully human as Mowgli, the “man cub” of the forest. Grade: A

First off, let me just say that I’ve never seen all of the original Jungle Book.  I’ve seen bits and pieces, from the boa constrictor Kaa’s hypnotizing “Trust In Me” and King Louie’s “I Wan’na Be Like You” to Shere Khan’s bumbling animosity.  The 1967 film was definitely one for the kiddies, and that’s fine; it’s a much beloved classic.  I have, however, read several of Kipling’s Mowgli stories, and loved their blend of dark and light.  While fans of the original film will see echoes of their childhood favorites here, director Jon Favreau adds in a touch of the darkness that makes the Kipling tales so compelling.  And by doing so, brings a beloved tale into the 21st century.

In The Jungle Book, “man cub” Mowgli (Neel Sethi) is a child literally raised by wolves.  (I pity the grown adult who asks him that question if Mowgli is ever off his etiquette… “Why yes.  Yes I was.”)  His wolf-mother, Raksha (played by a wonderfully emotive Lupita Nyong’o) adores him, as do his wolf-brothers and wolf-father Akela (Giancarlo Esposito).  But Mowgli isn’t advancing like his wolf-brothers; Mowgli must resort to “tricks” like the use of tools or climbing trees in order to keep up.  Soon the pack must decide what to do with their beloved man-cub, but that choice is taken out of their hands when tiger Shere Khan ( Idris Elba) discovers Mowgli at a watering hole during a dry season “Water Truce”.  Shere Khan was maimed by a human man, and now feels that any other human must pay the price.  Panther/BFF Bagheera (Ben Kingsley) tries to take Mowgli to the Man Village, but is ambushed by Shere Khan along the way…leaving Mowgli to meet Kaa the snake (Scarlett Johansson), Baloo the bear (a perfectly cast – and dare I say spunky? – Bill Murray), and many other animals in the deeper parts of the jungle.  Meanwhile, Shere Khan waits for Mowgli’s return, and Raksha fears for both her pack and her man-cub.

Oh, and there’s a pangolin in this film too. So enjoy a pango-pic from SavePangolins.org!

If you’ve seen the trailer for this film, you know what I’m gonna say next; the visuals in this film are absolutely astounding.  Take the tiger from Life of Pi, stir in the fantasy forest of Avatar (maybe not so much blue or jellfish floaties) and a hefty dash of the anthropomorphic perfection of 2014’s Dawn of the Planet of the Apes, and you’ve got an idea of Jungle Book‘s level of visual excellence.  I knew in my heart that there was no way in hell Disney would shoot a film with live animals thisclose to a young tween, but the quality of visual effects in this film had me suspending my disbelief for the majority of the film.  Sethi is the only live-action actor on screen, but dang if my babybrain could compute that.  For me, it was all animals, all the time.

Part of that accomplishment goes to Favreau’s use of soundstages and blue-screen to create a jungle just as fantastical as the anthropomorphic animals that inhabit it.  By keeping everything an illusion, it all blends to make the film more of a reality than if the crew had tried to inject CGI creatures into real landscapes.  There’s no waver of CGI-meets-real to be seen, not a hiccup of tech to give anything away.  In fact, the animals look so real I wanted to pick up Mowgli’s runty brother Grey and snuggle him, and call him George.  Sadly, Grey is nothing but pixels.  EXCEPT IN MY HEART.

The themes of growing up, becoming who you’re meant to be, and deciding who you’ll become are loud and proud here.  The Jungle Book has always been a mix of hero’s journey and coming-of-age tale, and this film does a good job of dovetailing these ideas into a cohesive whole.  A huge chunk of why that’s so successful is on the shoulders of this film’s star, Neel Sethi.  Not only did this 12 year old have to run the gamut of emotions, he had to do so with nothing but the occasional puppeteer in a room full of bluescreen.  Sethi’s performance is very good on its surface, but knowing he was pretty much going it alone?  Outstanding.

Folks who love the easy-going, Stripes-like charm of Bill Murray will find it here in his voice performance as Baloo the bear.  He’s perfectly cast, as is Kingsley as the regal but caring Bagheera, and Nyong’o as the fiercely protective and unapologetically loving mother wolf Raksha.  I swear her scenes where Raksha proclaims Mowgli is her cub had me close to tears.  And, of course, Idris Elba can do no wrong as the Big Bad, Shere Khan.  There’s malice and a joy in his violence, but there’s also pain, and fear of the humans who scarred him.  It’s your typical Disney baddie, but Elba gives Khan a touch of believablility.  I understood why Khan was the way he was.  I didn’t like it, but I understood it.

So what’s not to like?  Well, A few of the characters  felt like they were given short shrift in this live-action film – Kaa and King Louie most especially – but I have to say that focusing on Mowgli’s bond with his wolf family, and the friendships he has with Baloo and Bagheera, make up for that.  Plus, this Jungle Book isn’t a musical, so time spent with the mesmerizing Kaa and the Gigantopithecus/orangutan King will be shorter since their musical numbers are cut short, or omitted altogether.  (Though do stay for the end credits, where you can hear Johansson’s haunting rendition of “Trust In Me”.  Well done.)  Yeah, so while I would have liked more herpy snaketime, I got more wolftime.  Guess I’m fine with that.  Plus, there’s a sequel in the works, so who knows what could come along next?

Okay, two last things before I go. One: get the to an IMAX 3D.  Seriously.  The CGI, art direction and overall amazing eyeball candy are worth springing for the big tickets.  Two: this movie is darker than the original animated Jungle Book, so gauge your young wannabe audience members accordingly.  No, it’s not as terrifying as censors in India would have you believe.  But the animals are so lifelike that very young ones could be afraid and/or sad when they fight, stampede, or otherwise get themselves in perilous situations.  Any child under the age of five should probably be sat down for the “real/not real” conversation before you don those hep 3D glasses.

Professional nerd. Lover of licorice.
View all posts by Denise →
This entry was posted in Movie Reviews and tagged Disney, Movie Reviews. Bookmark the permalink.