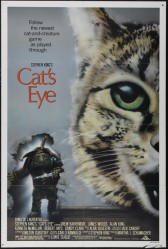 Story: New York City. A tough place for a cat to be on the street. Especially when scary stories pop up everywhere he goes. Don’t worry, little Drew Barrymore will take him in. After the other two stories play out, of course. But you might want to put out that cigarette, and step away from the ledge…

Remake, Sequel or OG (Original Ghoul)?: Based on Stephen King’s short stories stories, “Quitters, Inc.” and “The Ledge”.  The third/wraparound story, “General”,was written for the film.

Trick or Treat?: Oh how I love the 80s vibe of this film! (I miss you, 1985. Hope you’re well.) From the opening credits complete with synth-y organ music to the absolutely adorable little tiny Drew Barrymore. Then there are the Stephen King easter eggs for Cujo, Christine, The Dead Zone, Misery… Well, you get the drift.

Steve-O wrote the screenplay here, and the combination of horror and humor is definitely present.  With just three stories in this anthology, it clocks in at just under an hour and a half, which makes it a perfect addition to a horror anthology marathon.  While these three stories aren’t flat-out terrifying, there’s some good suspense.  Play this one right after Creepshow – back-to-back Stevie – and then end the evening with a Trick r Treat bang.