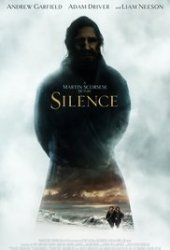 Nutshell: At close to 3 hours, Silence may be as much of a test of endurance and faith as those visited upon the Japanese believers of the 1600s. Yeah, not as bloody or agonizing, but Scorsese’s “dream project” is an exhausting film. Beautiful, moving, but physically tough to sit through. I can’t help but think that this would have been better – and easier to digest as a filmgoer – if it had been given a streaming channel limited series treatment instead of this Bataan Death March of a film. I may focus on the beauty and grace of the story and visuals later on, but now? Exhaustion’s all I’ve got. Grade: B

“Thousands are dead, because of what we brought them.”

Story: A Portugese Jesuit priest goes missing during his missionary work in Japan.  Two Jesuits head to Japan to try to find him, not fully understanding the horrors befalling any “Kakure Kirishitan” in feudal Japan.

Remake, Sequel, Based-On, or Orignal: Based on a novel of historical fiction by Japanese author Shūsaku Endō, and the Kakure Kirishitans of Japan’s Edo Period.

Gotta say: I’m still absolutely, completely wiped from my screening of Silence.  The one-two punch of an emotionally draining film, and a physically draining overlong film has me lying in bed as I tap this out. Okay, maybe not overlong.  But it sure feels that way.  At two hours and 41 minutes (per IMDb), it felt twice that.  Scorsese finally brings his dream project to life, but I sure wish someone had reined him in when it came to the length of his tale.

The cinematography here feels like Ran.  That’s a high compliment. The sweeping wide shots of landscapes are Fujifilm beautiful.  There’s also a wonderful use of fog and darkness, without sacrificing clarity of the visuals. Scorsese manages to use many film tropes dear to Japanese cinema – the lovable but confounding drunkard, the evil but intellectually seductive baddie, the honorable hero – to great effect. But after a while, all that glorious eye candy couldn’t hide the fact that the story was going on for far too long, bleeding the awe out of me drop by drop like some slow torture.

The actors here seem to pull their performances from the deepest depths of their emotions, delivering powerful – and sometimes painful to watch – performances.  Art direction is excellent and incredibly detailed, even when the characters reach their lowest point.  And I kinda love Andrew Garfield’s Breck commercial Jesus vibe, with his gorgeous male bouffant hairdo that only becomes bedraggled at the end. As fellow Jesuits, Adam Driver and Liam Neeson show other viewpoints the men whose task it was to spread the gospel held.  Silence does an excellent job of showing the human beings behind the message they spread, as well as the lengths believers in a “new” faith will go for their religion.

Especially powerful are the cast of Japanese actors portraying the Catholics the Jesuits come to minister and attempt to protect. The blending of Japanese honor and Catholic faith is powerful, but that steadfastness is what ultimately leads to their suffering (and in many instances, to their death.)

And though Garfield and Driver cut impressive figures as martyr-ready priests, I can’t help but liken their fervor to the hatred many fundies show to other religions in the USA today.  With hate being the rule of the day as we come to the inauguration of a new President, the parallels between the Jesuits attempting to spread their word at all costs, and religious fundamentalism in the USA that pushes aside anyone and anything “other” were uncomfortable.  It left a strange taste in my mouth, and watered down the film’s impact on me. But Silence does do a wonderful job at asking some tough questions; what is faith?  What is truth?  How do you know?  Who decides what is real and what isn’t?

Much like Ran, another film I slogged through at first and then came to love, Silence will probably push past my exhaustion and “Where’s my ‘I survived Silence‘ tshirt” feelings of too much all at once.  But be warned; this movie will ask a lot of you, and take a lot out of you.  Are you up for that task?

#Protip: While Shūsaku Endō’s novel is the basis for this film, if you’re looking for actual historical research, try these pieces.

Professional nerd. Lover of licorice.
View all posts by Denise →
This entry was posted in 7 Pieces Of, Movie Reviews and tagged Movie Reviews. Bookmark the permalink.