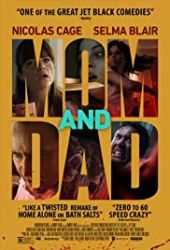 Story: Kids. I don’t know what’s wrong with these kids today! But unlike Bye Bye Birdie, the adults in this film don’t complain. They kill. Blame a strange static on the TV for turning parents fillicidal …or maybe it’s just pent up rage at the changes time hath wrought?

Splat factor: Mostly offscreen kills with only bloody messes as the aftermath.

Closing scene “shocker”?: Nope, but the last line of dialogue is perfection.

Remake, Sequel or OG (Original Ghoul)?: Original, though it’s definitely a role reversal of films like Children of the Corn and The Children.

Trick or Treat?: Hot damn this is a beautiful crazy mess. And you need to see it immediately. Flip Children of the Corn on its head, and add a touch of infection apocalypse, and that’s Mom and Dad, a batshit look at suburbia and family life infected with rabies.

Cage goes full Nick Cage Crazy in a soliloquy that’s absolutely beautiful. It’s fucking art y’all. It’s a gonzo look at midlife crisis and the lament of lost youth. Then Selma Blair takes the reins and her quiet continuation of those ideas makes it one of the best scenes I’ve seen this year. Yeah I said it.

The idea that parents go apeshit with the desire to kill their offspring but are otherwise their usual selves is a great touch that’s not typically the way things go in “kill the thing” infection stories. These parents aren’t mindless killing machines. They only want to kill their own children. They’re “normal” to everyone else. Writer/director Brian Taylor cuts scenes of hyped up action with flashes of how their life used to be when the kids were younger.

And don’t even get me started on the delightful twist that dials things up even higher in the last quarter of the film. I really want to give a shout out to the additional actors, but I don’t want to spoil a moment. Taylor, I forgive your Jonah Hex.

Part horror, part satire, part pitch black comedy, Mom and Dad is the movie you’re gonna want to watch with your friends… But maybe not other generations of your family.

Professional nerd. Lover of licorice.
View all posts by Denise →
This entry was posted in 31 in 31, In Horror, Movie Reviews and tagged 31 in 31, 31in31, Horror Movies, In Horror. Bookmark the permalink.