Mah people — tix to Baltimore Comic-Con are now on sale!

Hold the presses.  Stop the phone.  Whatever it is you’re doing, take 5 and get your friends on this; tickets to this year’s Baltimore Comic-Con are now on sale!  Now all you have to do is wait.  Patiently.  Or pace, but seriously that’s doing nobody any good and your dog is looking at you funny.

Tix for the weekend are $55, for one-day Friday or Sunday are $25, and Saturday-only is $35.  (There’s also a VIP level, and a Friday night “All Star Reception” for those interested & able to pony up some extra cash….)  Buy ’em here:  http://baltimorecomiccon.com/tickets/

And read on for the full press release from the BCC folks.  See y’all at the Con!

Tickets are Now On Sale for the 2014 Baltimore Comic-Con!

BALTIMORE, MARYLAND – June 27, 2013 – The Baltimore Comic-Con is happy to announce that tickets are now on sale for this year’s show, our premiere inaugural three-day event taking place September 5–7, 2014 at the Baltimore Convention Center in downtown Baltimore.Tickets that are now on sale include: Weekend General Admissions, and General Admission for Friday, Saturday, and Sunday. 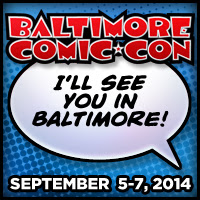 As always, children 10 and under are free! Additionally, VIP packages are available now, and are a separate purchase from General Admission tickets (which will be required to participate in any VIP offerings).

“This is such an exciting year for us, adding Friday to the weekend,” said Marc Nathan, show promoter for the Baltimore Comic-Con. “We know our fans have been anxiously awaiting ticket availability to buy for themselves, family members, friends, students, award winners, and any number of other scenarios we’ve heard about, and we genuinely appreciate everyone’s patience. This is going to be our biggest year ever with a third day and an even larger space in the Baltimore Convention Center, and we’re thrilled to have everyone to experience it with us!”

Visit www.baltimorecomiccon.com/tickets/ for more information and to purchase your advanced tickets!