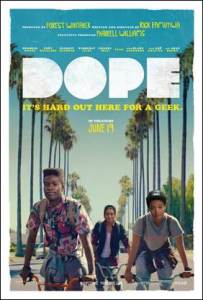 Yes, that I’m doing a Pass-palooza is definitely dope.  But it’s a giveaway for the film Dope.  Cool, right?  What’s the film about?  Glad you asked…

A critical hit and audience favorite out of the Sundance Film Festival, in DOPE, Malcolm (Shameik Moore) is carefully surviving life in a tough neighborhood in Los Angeles while juggling college applications, academic interviews, and the SAT. A chance invitation to an underground party leads him into an adventure that could allow him to go from being a geek, to being dope, to ultimately being himself.

I’ve seen the trailer, and gotta admit I’m interested.  If you are too, read on to see how you can score passes!What: ADMIT TWO passes for the Baltimore area screening of Dope!

Why: Because there ain’t no party like an indie film party!

REMEMBER: seating for screenings are first-come, first served and are not guaranteed. So get there early to make sure you get a seat.