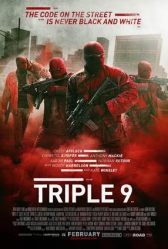 Looks like a group of Deadpool cosplayers are takin’ over y’all.  Oh wait.  This is actually a cops/mob/revenge flick with some heavy hitters headlining.  (Say that five times fast.)  Synopsis!

In TRIPLE 9, a crew of dirty cops is blackmailed by the Russian mob to execute a virtually impossible heist. The only way to pull it off is to manufacture a 999, police code for “officer down”. Their plan is turned upside down when the unsuspecting rookie they set up to die foils the attack, triggering a breakneck, action-packed finale filled with double-crosses, greed and revenge.

What: ADMIT TWO passes for the Baltimore area screening of Triple 9!

Why: Check that lineup again.  Nice.

REMEMBER: seating for screenings are first-come, first served and not guaranteed.  So get there early to get yourself a seat.