Pottermore welcomes you to the Ilvermorny School! 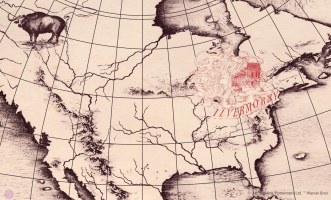 Any other owl-hopeful American psyched to hear about the Wizarding schools here in the States? Well, our wait is over; J.K. Rowling and Pottermore dropped a video about Ilvermorny School of Witchcraft and Wizardry, and it’s awesome.

In the under 2-minute vid, there’s plenty of mystery and marvel, and some cool claymation animation.  Don’t think it’s all you’ll need to know; it’s a tease at what I’m sure will be a fully fleshed out backstory for the house.  And I’m betting there’ll be plenty of characters mentioning Ilvermorny (not to mention a few alums) in Fantastic Beasts and Where to Find Them.  Of course, there are houses, but apparently they’re not exactly the same as what everyone is used to from Hogwarts, so don’t try to figure out the American Slytherin…

Check out the vid! And read up on Ilvermorny over at Pottermore. Don’t forget; Fantastic Beasts and Where to Find Them comes to theaters December 19th, 2016.