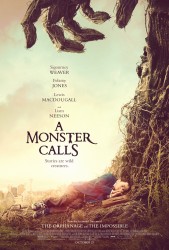 I don’t like to hate on films I haven’t seen yet, but A Monster Calls looks like the film BFG wishes it could have been.  This trailer for Monster is lovely, crazy, and filled with magic and mayhem.  It’s also got a touching Felicity Jones performance, and Sigourney Weaver as grandma.  Plus, it’s Liam Neeson who voices the titular Ent-like monster.  Color me intrigued.  Synopsis!

A visually spectacular drama from director J.A. Bayona (“The Impossible”). 12-year-old Conor (Lewis MacDougall), dealing with his mother’s (Felicity Jones) illness, a less-than-sympathetic grandmother (Sigourney Weaver), and bullying classmates, finds a most unlikely ally when a Monster appears at his bedroom window. Ancient, wild, and relentless, the Monster guides Conor on a journey of courage, faith, and truth. Toby Kebbell plays Conor’s father, and Liam Neeson stars in performance-capture and voiceover as the nocturnally visiting Monster of the title.

A Monster Calls bursts into theaters this October.

Professional nerd. Lover of licorice.
View all posts by Denise →
This entry was posted in Trailers and tagged Movie News, Trailers, TrailerWatch. Bookmark the permalink.