Gotta love the day after San Diego Comic-Con.  Y’know, if you weren’t there.  Because all the info!  For example, here’s some Spider-Man: Homecoming pics from Hall H! But first, synopsis!

A young Peter Parker/Spider-Man (Tom Holland), who made his sensational debut in Captain America: Civil War, begins to navigate his newfound identity as the web-slinging superhero in Spider-Man™: Homecoming.

Oh, and peep the official image:

Pretty sweet, right?  And I’m digging how director John Watts is calling this a “straight up high school movie”.  This sounds like it’ll be an Everyman superhero fillm.  Because as much as we’d like to be a billionaire playboy, Norse god, super-assassin, or King/Queen of Wakanda?  It’s more likely we’ll be day-to-day folks like Petey.

Oh, and here; have a still of the cast when they were in Hall H!  Man, next year y’all… 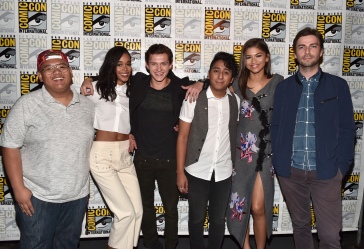