Image via The History Channel

I admit ENTIRELY that this one is all Tom Hopper’s fault. I was rewatching Black Sails (y’all – it’s pirates! Plus history! And since it’s on Starz there’s tons of sexy sex!) and was like, I need more Billy Bones in my life. Since he only gets like a minute total on Doctor Who, I maaaaaaaaaybe used my parents’ Verizon bonus points to purchase and watch all 5 episodes of Barbarians Rising. (Look. They weren’t using them and also I really like the Punic Wars.) 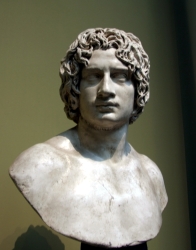 Image via wikicommons. This guy is less Tom Hopper, more Brendan Fraser. But then again he might not even be Arminius, so.

So…Arminius. Dude was basically Theoned out of Germany as a kid to grow up and train as a soldier in Rome, only this guy wasn’t actively the worst at first, got his dick cut off and who knows what else by one of the worst characters on TV maybe ever?, and then became sympathetic (…spoiler alert) and pseudo redeemed himself by realizing women rule this bitch and that he needs to either help or get the fuck out of the way. Anyway. Arminius. Right.

Basically, he’s killing it (I assume literally) over in the Balkans, rising to the rank of Equestrian (he got to ride a horse! Big deal back then!), before heading over to Germany to drive the Romans out of his ancestral homelands, etc. My boy Armin goes all Gandalf the White (IMO it was Gandalf doing the heavy lifting there – Aragorn was more a symbol to rally around and also he was too busy chasing lost hobbits and getting the scrubbing bubbles to fight for him to be all that much help) and unites a bunch of German tribes, hides them in a forest, and then gets his erstwhile commander to mosey his troops on through said forest in single file, like he’s trying to be a damn shooting gallery. Check the gif for clarification on how TWO HUNDRED GERMAN (barbarian)S slaughtered 20,000 Roman soldiers.

Pretty sure this is the battle thingy from that specific ep.

Rome, shockingly, was not cool with this next level spanking. So they a) tasked his brother with going back and defeating him (didn’t work), and b) kidnapped his pregnant wife and paraded her through Rome as evidence of a victory in Germania. I guess that’s how you do when news travels at the speed of a camel, and you have a massive empire to run – you act like you didn’t want that smelly province anyway, and station your troops along the Rhein and the Donau to make sure they stay on their side of the river. Ultimately, the Battle of the Teutoberg Forest was so epic that it contributed to Rome effectively half-assing every subsequent attempt to conquer Germania, then giving up altogether (granted, that’s disputed – but it sounds hella cool).

Hey Benny, looks to me like you’re on the wrong side of the river!

In more recent German history, Arminius was interpreted as a symbol of German nationalism and superiority. Which, I get. This is a grade A underdog story, and people love that shit. I mean, I don’t think it’s hyperbole to say that Americans are the undisputed kings at spinning a tale so we come out looking like we didn’t really want to fight, but damnit someone had to go in and clean up x or y’s mess. So Armin should have been Germany’s George Washington, or something. (I think maybe Barbarossa is Germany’s George Washington? I should know this.) But thanks to History’s Number One Dickbag, Hitler, German nationalism will always be suspect. Per Der Spiegel:

In fact, a lot of Germans don’t even know about Arminius. Many schools shunned his story after 1945 because he became contaminated by the militant nationalism that led to Hitler.
…
But the myth of Hermann has lost its power in modern Germany. The old nationalism has been replaced by an easy-going patriotism that mainly manifests itself at sporting events like the soccer World Cup. Today’s interest in Arminius mainly reflects curiosity about what really happened in that fateful September 2,000 years ago.

But so! Thank you, Tom Hopper for introducing me to some cool history shits about my mutterland of which I had never before been aware. I’m a huge fan of the History of Rome podcast, and since the host goes through the entire history of Rome, he’s got an ep on my boy Armin. (I know in German it’s Hermann but this guy will forever be Hermann to me. Also, come on. Hermann the Conqueror? Lolnope. Also Armin Müller-Stahl is cool.)

Just, look at those guns.