Luc Besson’s “Valerian and the City of a Thousand Planets” to give away tie-in comic during Free Comic Book Day! 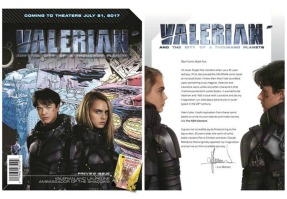 Clicky for the full-sized image!

As the heavily buzzed film Valerian and the City of a Thousand Planets is based on the French comics series Valerian and Laureline, I’m stoked to hear that this year’s Free Comic Book Day is giving away a movie tie-in issue.  I can’t wait to get my grubby paws on one, and check out the story before this film hits theaters this July.  While I’ve heard a TON of great things about this film, I really want to dig into the comics as well.  So?  Win-win.  Bravo, Luc & FCBD!

Read on for all the details – and if you’re hitting Geppi’s this year, I’ll see you at FCBD on May 6th!

LUC BESSON’S ‘VALERIAN AND THE CITY OF A THOUSAND PLANETS’

April 24, 2017 – Los Angeles, CA – An exclusive comic book featuring the stories that inspired the upcoming film Valerian And The City Of A Thousand Planets will be available to fans around the world for free at local comic book stores, on Saturday, May 6, 2017 as part of “Free Comic Book Day,” it was announced today by STXfilms, EuropaCorp, and Cinebook.

In anticipation of the July 21st film release of Valerian And The City Of A Thousand Planets, this 32-page, free issue will feature a preview of the story from the comics that inspired the film, as well as exclusive, behind-the-scenes content from the highly anticipated, summer film developed and produced by EuropaCorp and distributed in the United States by STXfilms.

The original ground-breaking French comic series of VALERIAN AND LAURELINE published by Les Éditions Dargaud, was created by Pierre Christin and Jean-Claude Mézières, and inspired a generation of artists, writers, and filmmakers. “VALERIAN AND LAURELINE” ran for 43 years and is collected in 23 volumes. This year, the series is celebrating its 50th anniversary coinciding with the feature film’s release in July.

”It gives me incredible joy to finally bring to the big screen, 50 years later, the work of comic book creators Pierre Christin and Jean-Claude Mézières that originally sparked my imagination and set me on this incredible journey,” said writer/ director Luc Besson.  “I look forward to introducing a new generation of fans to the adventures of Valerian and Laureline.”

ABOUT VALERIAN AND THE CITY OF A THOUSAND PLANETS

STXfilms thanks Cinebook and Bliss on Tap who were instrumental in bringing this preview issue to fans on Free Comic Book Day. The 32-page preview issue will be printed at its original, European size. Check with your local comic book shop for more details. Availability is limited.