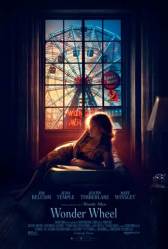 Get ready for a star-studded cast, Woody Allen at the helm, and a film that has Awards Season Onslaught written all over it (that’s a good thing, y’all.) I’ve got passes for Wonder Wheel, and I’m ready to share.  Synopsis!

WONDER WHEEL tells the story of four characters whose lives intertwine amid the hustle and bustle of the Coney Island amusement park in the 1950s: Ginny (Kate Winslet), an emotionally volatile former actress now working as a waitress in a clam house; Humpty (Jim Belushi), Ginny’s rough-hewn carousel operator husband; Mickey (Justin Timberlake), a handsome young lifeguard who dreams of becoming a playwright; and Carolina (Juno Temple), Humpty’s long-estranged daughter, who is now hiding out from gangsters at her father’s apartment. Cinematographer Vittorio Storaro captures a tale of passion, violence, and betrayal that plays out against the picturesque tableau of 1950s Coney Island.

I can’t wait to see that cinematography; Coney Island is such a fantastic place.  Also, who doesn’t love Winslet and Timberlake?  Let’s go!

What: ADMIT TWO passes for the Baltimore area screening of Wonder Wheel!