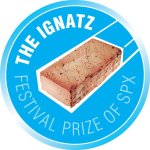 It’s that time of year again kids. Time for the bestest indie comics gathering to announce their best of picks. Or as I like to think of it, Goodreads Queue Expander Season! Because SPX just dropped their nominations for their Ignatz awards!

So many incredible noms…I’ma make it raaaaaain in Artist’s Alley (again)! Read on for the full list – and CONGRATULATIONS to all the nominees!

Bethesda, Maryland – August 27, 2018
Media Release – The Small Press Expo (SPX), the preeminent showcase for the exhibition of independent comics, graphic novels and alternative political cartoons, is pleased to announce the 2018 nominees for the annual presentation of the Ignatz Awards, a celebration of outstanding achievement in comics and cartooning.
The Ignatz, named after George Herriman’s brick-wielding mouse from his long running comic strip Krazy Kat, recognizes exceptional work that challenges popular notions of what comics can achieve, both as an art form and as a means of personal expression. The Ignatz Awards are a festival prize, the first of such in the United States comic book industry
The nominees for the ballot were determined by a panel of five of the best of today’s comic artists, Mita Mahato, Carolyn Nowak, kevin czap, Leila Abdelrazaq, and Taneka Stotts.
Congratulations to all our nominees!, with the votes cast for the awards by the attendees during SPX. The Ignatz Awards will be presented at the gala Ignatz Awards ceremony held on Saturday, September 15, 2018 at 9:30 P.M.
Outstanding Artist
Outstanding Collection
Outstanding Anthology
Outstanding Graphic Novel
Outstanding Series
Outstanding Minicomic
Outstanding Comic
Outstanding Online Comic
Promising New Talent
Outstanding Story