The Walking Dead issue #100: thoughts and such

Okay, so it’s hit the shelves.  In fact, it’s blown off the shelves and headed into a second printing.  For those of you that are fans of TWD, be it Kirkman’s comic or the TV show, you’ve probably heard about the big release for issue number 100.  Several variant covers (including the one below showing Rick in a field of characters we’ve all seen die in this series), teaser posters (“Lucille is Coming”), and of course all the brouhaha at San Diego Comic-Con.  And after folks got their paws on the issue?  The hate nearly caught the interwebs on fire.  Yes, Kirkman kills off a popular character.  Yes, that sucks.  But I had to see for myself where all the hate was coming from.

Usually, I go for the trade paperbacks.  It’s a great way to get a bunch of issues in one clip.  However, with the bell-ringing for 100, I figured read it soon before it gets spoiled for me.  So I finally finished the issue (and a few of the ones before that, as The Walking Dead Volume 16: A Larger World stops at #96.  And I have to say that I hated to see that character go.  It’s a wicked, senseless act that has some calling snuff, and it really is very gross.  Adult HORROR comic series, folks!  Easy to forget that with all the work Kirkman does to pull you into the characters.

I kinda loved that Kirkman breathed an ill wind into the world of Rick Grimes and his band of survivors.  Things were getting a bit too commonplace, everyone was getting a little too comfortable.  Remember what happened last time?  Yeah; the Governor.  I hated that character, and I hate this new character, Negan.  It feels as if Kirkman crossed Mad Max with his own Governor.  Yet, I ain’t mad.  In this new world of zombies, where the structure of civilization has crumbled?  It’s not hard to imagine that there are some really sick puppies that are looking for a way to scam their way into surviving.

Warning; beyond this image lies spoilers…. 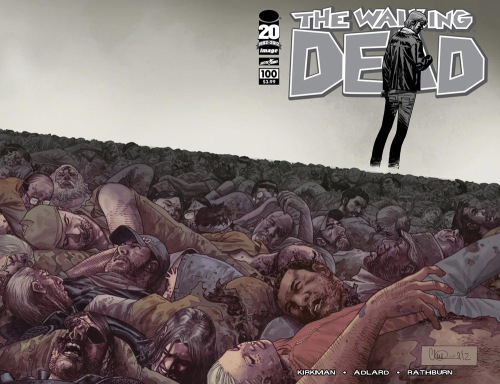 Spoilers.  Spoilerage.  Talkin’ about exactly what happened.  Here there be tygers.  Yada yada.

Even though Kirkman killed off a beloved character this go-round, how is that any different from his killing off other characters we’ve loved or really liked?  Shane, Tyreese, Hershel.  Hell, I was even kinda upset when Douglas Monroe kicked it.  But Glenn.  GLENN!!!  I loved him!  I mean really identifed-felt-his-pain-not-just-because-he’s-Asian-too-but-because-he-is-Everyman-coulda-been-my-bff-for-realzies’d him.

Okay, I think we all kinda saw Glenn’s death coming, hindsight being 20/20 and all.  Face it; Maggie was pregnant, little Sophie was starting to come out of her shell, and the gang had just found Garden-o-copia at Hilltop.  Glenn is the happiest we’ve seen him in a very long time.  When the whip comes down, indeed.  (Yeah, I know that I’m taking the Stones out of context, but that line feels right.)  Now we have to think about how Maggie and Sophie will continue on — my hope is that Maggie becomes a badass like Andrea but I may be wishing too hard — and how the gang will pull a win out of the bag this time.  Because with Negan, it’s gonna get ugly.

Oh, but it got ugly with the Governor?  Yeah, you’re right.  But the Governor was overseeing a bunch of folks that were mainly regular ol’ townsfolk.  Townsfolk that came out to watch the zombie/human games, but not badasses.  I get the feeling with Negan’s crew, it’s heavy on the badasses.  And when I say badass, I mean sick fuckers.  Negan threatens to 1) force Rick to “go oral”, 2) pull a train on Carl if Rick doesn’t fall in line, and 3) says fuck more times than I’ve ever seen outside of 7th Grade.  It’s good to see that homophobic weirdos are alive and well after the zombie apocalypse.  Right there with cockroaches.

A lot of folks say they’re done with the series because of Glenn’s senseless death.  But I say that makes this series even more realistic.  What’s more real; Glenn and Maggie living at Hilltop with Sophia and their baby, making daisy chains?  Or a horrible act of violence out of nowhere, in this hardscrabble existence they must endure?  Doesn’t mean I have to like it, but as Chris Rock says, I understand.  Sadly, I”m guessing this series will end with everyone ultimately biting it/getting bit/biting someone else, with Rick the last man standing (until his death at in the very last issue.)

I come back to this series because it’s an amazing look at a post-apocalyptic landscape, and it has characters I give a shit about.  And frankly, I read Crossed too, and it’s nice to be able to know that things aren’t gonna get too extreme here.  (Yeah, it’s all a matter of perspective after you’ve leafed through Crossed.)  So I walk away from issue #100 knowing that even though I’m ticked that one of my favorite characters shuffled off this mortal coil, the fact that I’m still upset about it makes me want to continue on this journey with Kirkman.

But if he kills Andrea off soon, Ima smack a bitch.

Professional nerd. Lover of licorice.
View all posts by Denise →
This entry was posted in Comics & Graphic Novels and tagged Comic Books, Robert Kirkman, The Walking Dead. Bookmark the permalink.