What was I thinking? – The Walking Dead: This Sorrowful Life 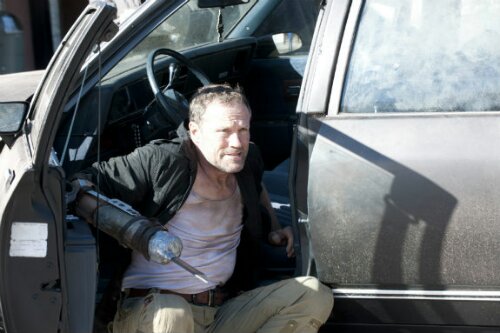 Okay y’all. This was the episode where Merle’s heart started beating again, Michonne proved her mettle to the last three people that didn’t believe she was a badass, and Daryl gets more crap to deal with.

:02 – Meanwhile, Merle tries to get his ganja on. Priorities.

:04 – When Merle is the voice of ethics and responsibility, you know that the world has truly gone to hell.

:11 – Carol trying to reach Merle. Daryl telling Glenn that Merle feels bad for what he did. Merle, Merle, Merle. Am I the only one thinking Merle ain’t long for this world?

:16 – Laurie sighting! Rick’s losing it. Again. Then again if you’re not feeling like garbage when you contemplate selling out a friend, your soul is dead.

:24 – It’s the Civil War up in here y’all. Brother against brother is going happen.

:27 – “You have my blessing.” A touching bit of calm before the storm.

:48 – Damn that’s cold! Step aside honey badger. The Governor don’t give a shit.

:54 – “Yes.” This is definitely a feeling all the feelings episode, people. And hello, a rock worth cutting someone’s finger off for. I guess.

1:00 – Next episode, more lying from The Governor!

Next episode promises to be a real throw down. But til then I’ve gotta wonder….

* Will Daryl turn to Carol for comfort (please say yes!)? Or will he push her away (dammit!)?
* Does having a ginormous sparkly rock on your finger make it easier for zombies to find you?
* Will Ghost Laurie join in when hell comes knocking, or is she just hanging around because heaven’s out of beer?

Professional nerd. Lover of licorice.
View all posts by Denise →
This entry was posted in Streaming Things, What was I thinking?. Bookmark the permalink.