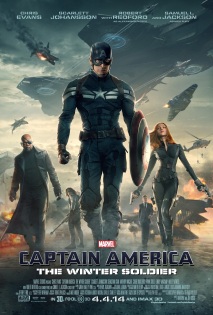 Comic book movies are really picking up steam, but not every pulp story is worth it’s weight in celluloid.  Captain America: The Winter Soldier – definitely one of the good ones.  Not only does Winter Soldier kick all sorts of ass, it’s raising the bar for TV’s Marvel Agents of S.H.I.E.L.D.  Things are getting good all over the Marvel universe, and you’re gonna want to hang with Cap to check out all the awesome.

When we last saw Cap, he was eating schwarma.  (Remember: his cameo in Thor: Dark World was actually Loki poking fun at the all-American guy, and not the Avenger himself.)  Now he’s in DC, doing the low-key Steve Rodgers thing. Oh, he’s still the super-strong dude we all know and love (and still played by the buff and adorable Chris Evans), but he’s taking it easy, catching up on American pop culture — his to-do list is an absolute hoot — and running circles around poor agent Sam Wilson (Anthony Mackie, The Hurt Locker).  Oh, don’t feel too bad for Sam; he’s got something up his sleeve.  Er, on his back.  Okay fine; he’s Falcon, and this movie introduces this character in an action-packed way.  Not that they could have done anything less, as the entire film is a crazy-cool ride that lets up just enough to give viewers a reason to care about these characters, but never once lets the adrenaline dip.

Enough of my own exposition, back to the story.  Cap is joined by Black Widow (Scarlett Johansson) to help a S.H.I.E.L.D. member that has been captured by no-goodniks.  But things go from bad to worse, and Cap and Black Widow find themselves in a situation where they don’t know who to trust.  Oh, and there’s an incredibly powerful assassin called The Winter Soldier that has popped up, and he seems unstoppable.  Sounding pretty vague?  Can’t help it; things get revealed in Winter Soldier that are so spoiler-y that I can’t in good conscience ruin ‘em for you.  But I can say that they’re real, and they’re spectacular.

Do I sound like a plant?  I can’t help it.  I loved this film.  Maybe it’s because I’ve been to too damn many screenings that sailed past the two hour mark and left me feeling like I’d spent weeks glued to my theater seat.  Maybe it’s because the Winter Soldier storyline has tons of twists and turns, with enough special effects and things-that-go-boom to have even the most jaded superhero film fan bouncing in her seat.  And it’s not just the mid-credit and post-credit teasers that have me excited (more on those in just a tic); the film rocks on many levels, and that’s a good feeling for fans and casual filmgoers alike.

The art direction, CGI and special effects are top-notch, the sound editing is spot on (tough for a film with so much going on all at once), and costuming hits the sweet spot between not cool enough and over-the-top.  The actors are all on-point here too.  Wondering if ScarJo can handle all that Black Widow badassery?  Worry no longer.  She’s in her element here, and I’ma say it; this is the role she was born to play.  (That said, I’m still looking forward to her turn in Luc Besson’s Lucy, where she gets to kick even more ass.) Don’t worry fellas; there’s still plenty of shots of her butt.  No offense Scarlett, but I only wish the same could be said of the Captain.

Evans is allowed to do more than just flex and be The Good Guy; he’s put through an emotional wringer, and gets to do some character development that’s sure to be addressed in the Avengers sequel.  There’s great chemistry between Mackie and Evans, and I’m looking forward to more Falcon in the Marvel film universe.  Hear that, Marvel?  PUT HIM IN ULTRON.  Lastly, because the cast list is way too long for me to blow lovin’ smoke on everyone, Samuel L. Jackson is as shut-yo-mouth awesome as ever, perhaps even more so because in this film he’s allowed to show a softer side of Nick Fury.

My pet peeve?  I get that this is in a universe where S.H.I.E.L.D. and superheroes exist.  But does DC have to…look nothing like DC?  Yes, overhead shots are of my hometown, but otherwise it’s DC by way of Cleveland, and locals will snicker at the “Metrobus” and “subway stops”, not to mention the buildings.  There’s no skyscrapers in DC.  Ahem.  Anyway.

Now, to the thing that fans wanna know most of all; are there end-credit scenes?  Yes, and yes.  The usual two-shot will be on Winter Soldier, and both the mid-credits scene and the post-credit scene will blow fans away.  There’s an Avengers: Age of Ultron “prologue” (directed by Joss Whedon himself!  I know!), and a quick look at something that happened immediately after the Winter Soldier storyline ended. What’s really refreshing is how Winter Soldier dovetails nicely with the Marvel Agents of S.H.I.E.L.D. tv series.  Hello, continuity! Don’t worry, you didn’t need to be a weekly viewer to get the most out of Winter Soldier; the film stands on it’s own.  (And S.H.I.E.L.D. has only just started to get good in the last handful of eps.) However, moviegoers that have seen the last few episodes on Hulu, On Demand or live will be extra pleased.  If you haven’t?  May I suggest catching the last four eps after you return home from this film?  You’ll be grinning at the subtle reveals that show themselves plain.  Here’s hoping more of the Marvel film gang will pop in on the tv show; we’ve got a while before the next Marvel movie y’all.  My #1 hope is that Cobie Smulders’ Agent Maria Hill guest-stars on S.H.E.I.L.D. very soon.  Man I hope so.  Tune in next week to find out…and while you’re waiting, head out to catch Captain America: The Winter Soldier.  Seriously, it’s good superhero stuff.

Professional nerd. Lover of licorice.
View all posts by Denise →
This entry was posted in Movie Reviews and tagged Captain America, Marvel, S.H.I.E.L.D.. Bookmark the permalink.