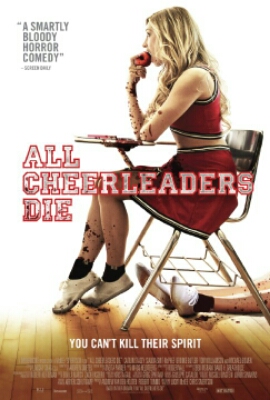 Maddy becomes a cheerleader, just so she can get revenge. But things go boink after a car accident leaves four cheerleaders – including Maddy – dead. Maddy’s “Wiccan” ex-gf Leena brings them back from the dead, but there’s a catch. There’s always a catch.

Scares: More of the jumpy variety. Calling what Leena does “Wiccan” is the truly horrifying part of this story.

Splat factor: Scattered here and there. Makeup FX are extremely well done, but the succubi feeding scenes are straight from The Asylum’s Syfy mockbusters. Keep focused after the climax, for a seriously cool and gory entrance by a main character. Niiiiice.

Trick or Treat?: Surprisingly watchable for a Netflix film that’s currently rockin’ a two star rating, but that doesn’t mean you won’t notice story bits coming a’tcha from a mile away. Video diary? I’m sure that’ll never come back to bite you in the ass, honey. One sister dates a guy that the other sister is in love with? Guess that undercover jealousy will bite them both in the ass. And poor old neighbor guy? Yeah, you’ll just be bitten in the ass.

The blood and life-energy combo that the girls need to stay at their best is a nice change from the usual zombie munch happening in the genre right now. So’s the crystal magic that brings them back, and the twists here and there that shake up the usual horror clichés. There’s humor here too, as the cast and crew all play it tongue firmly in cheek. Bad guy footballer Terry is a bit of an odd duck here though; majorly villainous and severe, his character seems out of place with the tone of the rest of the story. That dastardly dude really harshed my horror comedy mellow. But Maddy as the inadvertent heroine just about balanced him out.

The production is strictly low-budget, and the ending is a bit too abrupt, but All Cheerleaders Die is still a good time. I’m game for a sequel if it’s as cool as this. To quote the girls, bring it bitches.

Professional nerd. Lover of licorice.
View all posts by Denise →
This entry was posted in 31 in 31 and tagged 31 in 31, Horror Movies, Satire. Bookmark the permalink.