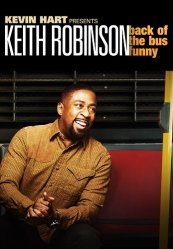 Kevin Hart’s funny. That’s a given. But did you know about the man he calls his mentor, Keith Robinson? Obviously, Robinson is funny too. In fact, he’s in Trainwreck; check out the going-to-the-movies scene. The couple Amy and Aaron argue with? Keith Robinson and Marina Franklin. Told you this film was full of funny folks.  BTW, Robinson was a writer for The Wanda Sykes Show & Chappelle’s Show.  ‘Nuff said people.

Robinson has a new comedy special from Comedy Central called Kevin Hart Presents: Keith Robinson – Back of the Bus Funny.  And the trailer hints at some riffs on childhood, levels of stardom, politics, and social media popularity.  Back of the Bus Funny hits Comedy Dynamics Friday, August 28th, 2015.  This cable-cutter is looking forward to getting into this special this weekend.  Thank you Roku.

Read on for the full press release!

Kevin Hart Presents: Keith Robinson – Back of the Bus Funny Premieres on Comedy Dynamics on 8/28

Hartbeat Productions and Comedy Dynamics will be releasing a trilogy of specials over the next year. The other two include Kevin Hart Presents Lil Rel: RELevant and Kevin Hart Presents Plastic Cup Boyz. Keith Robinson rocks a live audience with laughter at the Gramercy Theater in New York City. He takes us through a unique view on racism, enlightens us with the different ways men and women cheat, and gives a fresh perspective on growing old.

High-profile comedian Kevin Hart is currently filming Central Intelligence with Dwayne Johnson, aka “The Rock.” Recent film credits include Get Hard, opposite Will Farrell, and The Wedding Ringer. Hart can also be seen on the road for his “What Now” Comedy tour. In 2016, Hart will star in Ride Along 2. Previously he has starred in Think Like a Man, Think Like a Man Too, Ride Along, Grudge Match opposite Sylvester Stallone and Robert DeNiro, and About Last Night. Hart also had a supporting role in the Nick Stoller comedy Five Year Engagement, produced by Judd Apatow. He is a force in television as an executive, producing the hit BET show, Real Husbands of Hollywood.

Keith Robinson is one of New York’s elite, and has built a reputation, best described by Cringe Humor for “being the best at impromptu zingers and one-liners that annihilate his colleagues.” Known as the “quintessential comedian’s comedian,” Robinson finds the funny in everything from politics, music and pop culture to growing up in South Philly. The stand-up comic and actor has been a fixture on TV’s biggest comedy showcases, including Chelsea Lately, Tough Crowd with Colin Quinn and HBO’s Def Comedy Jam, and has starred in his own episode of Comedy Central Presents. A former writer for The Wanda Sykes Show and Chappelle’s Show, Robinson was most recently seen in Amy Schumer’s hit movie Trainwreck. His numerous live performances span the globe, with stand-up frequencies at the Improv and Laugh Factory in Los Angeles, and Comedy Strip in New York.

“Robinson is a fantastic comic,” says Brian Volk-Weiss, president of Comedy Dynamics. “He’s a pillar of the New York comedy scene and it’s an honor to be working with him.”

Professional nerd. Lover of licorice.
View all posts by Denise →
This entry was posted in Streaming Things and tagged Comedy Specials, Standup. Bookmark the permalink.