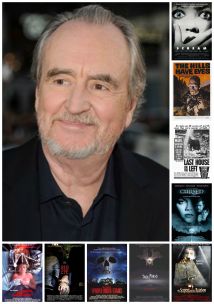 It’s a sad thing indeed when the first thing you see when you wake up is the obituary for someone you respect and admire.  So the news that Wes Craven has died at age 76 felt like a bad dream.  Guess it’s fitting, as Craven was a master of crafting bad dreams.  My formative horror years were spent poring over his films, my start of what can laughingly be called adulthood digging into his brief but fun stint in TV, and even now anytime I see something with his name on it, I’ve gotta check it out.

A lot of movie fans and professionals have much to be thankful for when it comes to Wes Craven.  Like “real world” horror?  His Last House on the Left is the battle cry of that subgenre.  Love meta-movies?  Scream kicked off the modern meta.  And, of course, his Nightmare on Elm Street helped kick-start the slasher genre, and added its own spin with dream imagery that many other moviemakers have run with since then.

I could go on and on, but you get the idea.  So instead of listing his incredible films, or talking about him personally — others have done that far better and with more insight than I — my tribute will be a simple Thank You for his work.  And a look at some of my absolute favorites outside the usual hits.

Swamp Thing: YES.  I love Swampy, and Craven’s look at the most natural of superheroes was 80s camp genius.  And also, Adrienne Barbeau.  ‘Nuff said. (Okay one more thing; the TV series isn’t as good as this film.  But if you’re really up for more, dig in.)

Cursed: Werewolves!  Wes!  Wednesday Addams!  It’s all here, and though the movie got no love when it hit theaters, there’s a fan base building for this.  Myself included.  I hated it when I saw it in theaters, I was still smarting from that letdown when I re-watched it in ’14…but damn if I don’t keep thinking that this film is fun.  Even when I re-read my review.  Go for the peeks at rising stars, stay for the possible drinking game opportunities.  Maybe it’s simply a movie I love to hatewatch?  Dunno.  But I can’t get it out of my head.  I think I need to see it again.

The People Under the Stairs: Yeah, this is the movie everybody seems to know of, but few outside the horror fandom have actually seen.  Shame, that.  It’s gloriously over-the-top, and a real hoot.  There’s nothing like the werewolf from Silver Bullet running around in a gimp suit shouting “Mommy!”, while kids sneak in and out of dark places.  Check it out.

Nightmare Cafe: Loved this 6-episode TV series.  The again I’m a huge fan of Tales from the Darkside, Monsters, Darkroom and Friday the 13th: The Series.  So understand that these episodes may be a bit dated looking.  But Freddy Kruger Robert Englund is always a welcome sight.  Think of the Nightmare Cafe itself as a sort of horror T.A.R.D.I.S., and it’s occupants as ersatz Timelords, allowing newcomers to try to fix something in their past.

Professional nerd. Lover of licorice.
View all posts by Denise →
This entry was posted in Entertainment News and tagged Wes Craven. Bookmark the permalink.