As always, clicky on the title below for the original piece! 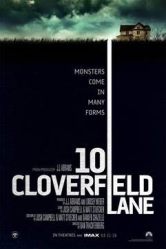 Nutshell: 10 Cloverfield Lane is a worthy successor to the original Cloverfield, actually beating the sophomore slump and rising above the first film..  Not in the handheld/found-footage genre (there’s nary a shakey-cam moment to be found) , but in the sense of dread, terror of the unknown, and a screenplay that manages to keep the adrenaline pumping.  The climax is well-executed crazy, thanks to this film’s game ensemble cast.  But are there monsters, you ask?  Depends on your definition of monster… Grade: A-

“I focused on being prepared. And I was…. And here we are.”

If you’re a kaiju nerd like I am, you were stoked for Cloverfield.  And while it wasn’t exactly the huge monster throwdown many of us were hoping for – that’d be Pacific Rim, a movie that actually grew on me on repeat viewings – Cloverfield‘s hints at a strange, unsettling mythology had me hooked.  Not exactly fully invested in its teasingly vague story, but willing to sit for more.  So?  More!  Well, kinda. J.J. Abrams still sticks with the producer role, and with Cloverfield director Matt Reeves also going the producer route in this sequel-ish film, Dan Trachtenberg gets his first feature-film directorial shot.  With a smaller ensemble cast – a mere three actors – this film is a sequel to Cloverfield in its ability to unsettle, play with your expectations, and leave you wanting more.

Michelle (Mary Elizabeth Winstead, The Thing) has decided to make a new start.  Leaving her apartment keys and engagement ring on the table, she drives off in search of…what?  We’re not sure.  Because she gets broadsided in the middle of nowhere, and when she wakes up she finds she’s been “rescued” by eerily sincere survivalist Howard (John Goodman, in top-notch creeper mode).  Seems there was a chemical attack that left the world’s population decimated and their air-filtered underground enclosure is the only thing keeping the three of them alive.

Three?  Yep; Howard’s bunker-building neighbor Emmett (John Gallagher Jr., The Newsroom) managed to force his way inside before Michelle arrived.  So while things go bump, bang, and crash in the night above them, they try to make the best of things by playing board games, making fluffernutters, and trying to figure out who among them can be trusted.  Because Howard is creepy and controlling, Emmett seems to accept the strangeness a bit too readily, and Michelle isn’t quite sure she was actually saved from death after all.  Bunker sweet bunker?  Not really; as the world outside unravels (or does it?), so does the world within the bunker.

I know the question on your minds; what’s the link here to the original?  Well, there are a few, but overall it’s the spirit of the film that makes 10 Cloverfield Lane feel like a natural extension to the first film. For example,  Cloverfield‘s Tagruato Corporation plays a small role here, but blink (or crunch your popcorn too loudly) and you may miss it.  Wanna hint? Fine. Have a link to the viral marketing.  Spoilers only if you don’t know how to Google. (But I still wanna know what evil lurks in the heart of SLUSHO…)

There’s a twist at the climax of 10 Cloverfield Lane.  And while it’s a fun ride, it feels like a genre shift of sorts.  Probably because this film was written completely outside of the “Cloververse”, and was tweaked to fit in (however tangentially) to what now is shaping up to be a curious but intriguing mythology.  And while I called the climax of the film after long before the opening credits hit, it’s how they got there that kept me riveted.  Kudos to the amazing John Goodman for his performance; his ability to turn his character’s emotions on a dime is what brings much of the creepy in 10 Cloverfield Lane.  Not all of it, mind you – not everyone’s motives or backstory are completely out in the open – but here in the bunker, that same sense of dread and uncertainty that wove through the original is here in full effect.  And honestly?  With it’s shift from wide-view “ZOMG THE CITY” to the quiet paranoia of waiting out the apocalypse, 10 Cloverfield Lane is not only a worthy successor, it’s better than it’s predecessor.

Professional nerd. Lover of licorice.
View all posts by Denise →
This entry was posted in Elsewhere Reviews, GeekForE and tagged Cloverfield, Geek for e, Movie Reviews. Bookmark the permalink.