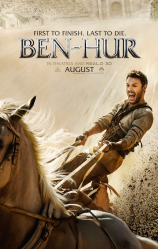 “First to finish, last to die.”

Seen the epic Ben-Hur?  You know the one, it’s got Charlton Heston, and an incredible chariot race scene that is a must-watch for any film fan. With the popularity of BC/early AD Judeo-Christian storytelling on TV and in film, it was only natural that this blockbuster would get the 21st Century treatment.

BEN-HUR is the epic story of Judah Ben-Hur (Jack Huston), a prince falsely accused of treason by his adopted brother Messala (Toby Kebbell), an officer in the Roman army. Stripped of his title, separated from his family and the woman he loves (Nazanin Boniadi), Judah is forced into slavery. After years at sea, Judah returns to his homeland to seek revenge, but finds redemption. Based on Lew Wallace’s timeless novel, Ben-Hur: A Tale of the Christ. Also starring Morgan Freeman and Rodrigo Santoro.

Yeah baby, you saw Morgan Freeman.  And I saw something else that immediately caught my attention; people of color playing people of color.  Who’da thunk?  Bravo, Paramount.  I’m also getting a definite Gladiator vibe, with a touch of Fury Road‘s races of destruction.  I’m interested to see if the crucifixion scene will be in this new film…with the flash of crown-of-thorns in this trailer, I’m betting we’ll get at least a peek.  Check out the trailer below; Ben Hur hits theaters August 12th, 2016.

Professional nerd. Lover of licorice.
View all posts by Denise →
This entry was posted in Trailers and tagged Trailers, TrailerWatch. Bookmark the permalink.