“Justice League” – the DCU takes a (small) step back 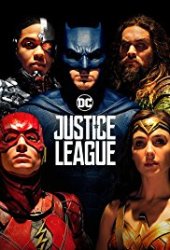 Nutshell: A game cast can’t hide wobbly pacing and a bare-bones plot.  While it’s great to see the gang finally together, Whedon’s lackluster script and Snyder’s lackluster directing cements my belief that like the MCU, DC needs to tap other creators for fresh ideas. You’ll get a better film.  See: Wonder Woman.  Grade: B-

I’m gonna break with my usual “7 Pieces Of” format here, because what I’ve got to say won’t take long.  No no no, things aren’t as dire as you might expect from that last sentence.  It’s just that as with the film Justice League, I don’t have much to say.

Was I happy to see Jason Momoa as Aquaman?  Damn straight I was.  And more of Ezra Miller’s Barry Allen/Flash was a welcome sight, and I love how Miller becomes all frenetic energy and hopeful enthusiasm.  It’s a different spin than the TV show, and though I was sad that Grant Gustin wouldn’t be taking his character to the big screen, Miller managed to make me forget about Gustin.  Well, for a bit. Cyborg?  I’ll get to him in a minute.

Then there’s the League triumverate: Batman, Wonder Woman, and Superman.  What, like you didn’t either 1) already peep the IMDb page, or 2) figure there was no way Clark Kent was sitting this one out?  C’mon, Cavill’s chiseled jaw is loud and proud, and so’s Affleck’s.  Gadot’s Diana Prince is just as Wonder-ful as you remember from her earlier appearances.

So what gives?  A lot y’all.  First off, Joss Whedon and Chris Terio (BvS) delivered a messy script that has the plot hop around frantically, never quite settling down on one thing.  That makes following the story difficult, especially if you’re not a DC comics devotee.  I just sat there staring at the screen, willing it to make some kind of sense.  But every time the action moves from an ensemble chat-session to actual action?  Things get confusing.  Whedon, you’ve got a knack with dialogue; where’d that go?  Certainly not into this script.  For every funny quip that lands where it should, there are several other lines that fall with a thud.

Or perhaps it was Snyder’s sudden, unavoidable family emergency that led him to step away from the film during production.  While nobody should favor work over family, the messy feel of this film could be the after-effects of others trying to figure out what to do next.  Don’t worry; Snyder’s “feel” is all through the film.  In fact, there were moments where I swear he was referencing his lackluster Sucker Punch in his blocking and lighting choices.  Not the best way to go, buddy.  And did you really go upskirt on Wonder Woman?  Sigh.  Well, at least the rest of the gang got their own butt-shot at the same time.  Equality!

Even the Big Bad is kind of a disappointment.  While Steppenwolf is a seriously powerful baddie in DC comics, JL either assumes you know all about him, or had no idea what to do with him.  Um, you could have asked me, I’d have told you; clue in your audience.  Jack Kirby’s “Fourth World” is fascinating…but this film seems content in simply throwing around a name or two.  In fact, Darkseid is only mentioned once, and that’s a shame.  At least the MCU knows how to tease out an important upcoming villain.  As it stands with this film, the Big Bad is simply a dude with a badass name and a definite Frank Franzetta fetish.  Then again nothing is touched on in more than just a cursory way, so I guess equality again?

What did the film get right?  Well for one thing, it gave me a closer look at Cyborg/Victor Stone (see, here he is.)  In JL, Stone is still trying to come to terms with his new reality, and Ray Fisher does an excellent job of portraying that personal struggle.   And though I mentioned Miller’s Flash earlier, there’s a nice bit of father figure camaraderie between Barry Allen and Bruce Wayne.  That’s a subplot I’d like to see developed in future installments.

Speaking of Batman, his own father figure, Alfred, doesn’t get much screen time.  But damn if Jeremy Irons doesn’t pack those moments with Grade-A acting.  Irons also has killer comedic chops – check out his SNL host gig before he won his Oscar – and his deadpan is glorious.  #MOARALFRED

And lest you think that I’d leave this review without breaking down Aquaman and Atlantis, I’ve got feelings and things.  While Steppenwolf doesn’t have to do much to…get what he needs in Atlantis, it’s great to see Mera.  Amber Heard does an impressive job with the character, though Mera doesn’t get to do much more than usher in her role in Aquaman.  Heard channels a regal bearing, and lifts the Atlantis scenes higher than the screenplay has a right to be.  Momoa’s Aquaman has a gruff exterior, but as with most heroes, he’s got a soft spot here and there.  (Mostly for humans that are unintentionally caught up in bad situations in or near water.) I worry that Snyder seems to use Aquaman as a lookit-this-dude kind of character, rather than allowing the King of Atlantis (yeah yeah, according to the DCU he’s not that…yet) to shine.  Here, Arthur Curry is pretty much a wild-child chaos warrior, which sounds cool on the page, but reduces the character to a cardboard cutout.

tl:dr?  Justice League doesn’t know exactly what it wants to do or tell its audience, and the action is overly edited with so many quick cuts that it’ll make your head spin.  But in-between the mess are moments of beauty and fun from an ensemble cast that treats their characters with more respect than the studio seems to.

Professional nerd. Lover of licorice.
View all posts by Denise →
This entry was posted in General Mayhem. Bookmark the permalink.