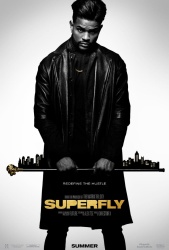 What a hell of a man… While I love the original Super Fly (c’mon now, who doesn’t?) it’s nice to see that the story and character is getting a 21st Century spin, so Priest can “re-define the hustle”. Synopsis!

Superfly – the film that helped define a genre in its characters, look, sound, and feel – is reimagined with Director X, director of legendary music videos (Drake, Rihanna), introducing it to a new generation.  The screenplay is by Alex Tse.

Trevor Jackson (Grown-ish) takes up the mantle of Priest in this remake, and he’s looking really good in the role. Hey, it doesn’t hurt that Jennifer Morrison (Once Upon a Time) and Michael Kenneth Williams (IT’S OMAR Y’ALL) are in for the ride as well. Superfly hits theaters June 15th, 2018.

Professional nerd. Lover of licorice.
View all posts by Denise →
This entry was posted in Trailers and tagged TrailerWatch. Bookmark the permalink.