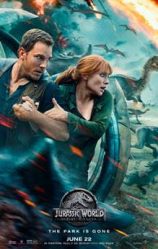 Ready to get your dinosaur on? Because I’ve got passes for the Columbia, MD screening of Jurassic Park: Fallen Kingdom! Synopsis!

It’s been four years since theme park and luxury resort Jurassic World was destroyed by dinosaurs out of containment. Isla Nublar now sits abandoned by humans while the surviving dinosaurs fend for themselves in the jungles. When the island’s dormant volcano begins roaring to life, Owen (Chris Pratt) and Claire (Bryce Dallas Howard) mount a campaign to rescue the remaining dinosaurs from this extinction-level event. Owen is driven to find Blue, his lead raptor who’s still missing in the wild, and Claire has grown a respect for these creatures she now makes her mission. Arriving on the unstable island as lava begins raining down, their expedition uncovers a conspiracy that could return our entire planet to a perilous order not seen since prehistoric times.

OOH! Plus, the trailers look epic. So let’s go!

How: It’s list time y’all! So you know what to do; send me an email at editor@atomicfangirl.com. Since there’s lots of running in this film, use the subject line “WHAT WOULD YOU RUN TO SAVE?” and then answer that question in the body of your email. Don’t forget to put your real name in the body of the email as well, because I can’t pick you as a winner if I don’t know what name to give the studio. YOU HAVE UNTIL JUNE 13TH AT NOON (EST) TO ENTER. ONLY WINNERS WILL BE NOTIFIED.

REMEMBER: seating for screenings are first come, first served and not guaranteed. So get there early to get yourself a seat.