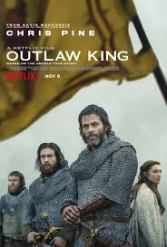 Good morning everybody! I’ve got passes for The Outlaw King, a groovy new history-based movie coming to Netflix…but why not see it on the big screen? Bigger is better, especially when it comes to awesome historical battles! Synopsis!

The untold, true story of Robert the Bruce who transforms from defeated nobleman to outlaw hero during the oppressive occupation of medieval Scotland by Edward I of England. Despite grave consequences, Robert seizes the Scottish crown and rallies an impassioned group of men to fight back against the mighty army of the tyrannical King and his volatile son, the Prince of Wales. Filmed in Scotland, OUTLAW KING reunites director David Mackenzie (Hell or High Water) with star Chris Pine alongside Aaron Taylor-Johnson, Florence Pugh and Billy Howle.

What: ADMIT TWO passes for the B’more screening of The Outlaw King!

Why: swords, Chris Pine and booze! (LHE has a bar, remember?)

How: LIST TIME Y’ALL! So send me an email at editor@atomicfangirl.com with “OH BRUCIE!” – and make sure you put your real name in the body of the email. I can’t add you to the studio’s list of winners if I don’t have a name to give ’em.

YOU HAVE UNTIL WEDNESDAY, OCTOBER 31st AT NOON TO ENTER. ONLY WINNERS WILL BE NOTIFIED.

REMEMBER: seating for screenings are first come first served and not guaranteed. So get there early to get yourself a seat.

Professional nerd. Lover of licorice.
View all posts by Denise →
This entry was posted in Free Screenings and tagged Baltimore Screenings, Free Screenings. Bookmark the permalink.