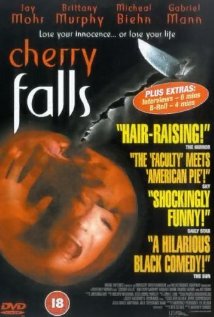 Scares:  the opening scene is pretty suspenseful. So’s the next murder. And the next. All in all some pretty good scary, especially for a movie that’s all about the satire.

Splat Factor: the opening scene is pretty bloody too (ditto the second & third murders, etc. etc.) Even though slaughter happens off-camera, we all get to see the aftermath when the bodies are found.

Remake, Sequel or OG (Original Ghoul)?: Completely original, even if it’s not the first spoof/satire of this genre. In fact, Cherry Falls is a fantastic spin on the slasher genre.

Trick or Treat?: Cherry Falls, cherry turnover. Both are delicious. This is a spoof that doesn’t feel heavy-handed, a satire that doesn’t hit you over the head with Meaning. And it’s a whole lot of fun.

Along with sly nods to spoofiness (quick shots of the school: George Washington High School, Erected. ERECTED.) there’s cool symbolism (a girl gets killed as her parents spill red wine at a dinner party.) And there are plenty of stars, like Brittany Murphy (R. I. P. darlin’), Michael Biehn, and Jay Mohr having fun and giving good act.

But when the cherry-popping party happens, what might have been a cheesy homage to Porky’s or American Pie becomes…kinda real. There’s humor, but there’s also touching naivete, timidity and fear of the unknown that has nothing to do with the killer on the loose. Intercut with the party are scenes of the climax with the killer, until the two combine in the finale. Bonus: the credits run up the screen, instead of down. Nicely done.

Watch it with a bunch of rowdy friends, ala the horror marathon in Scream. Serve cherry pie. Enjoy.

Professional nerd. Lover of licorice.
View all posts by Denise →
This entry was posted in 31 in 31, Movie Reviews and tagged 31 in 31, Horror Movies, Satire. Bookmark the permalink.