Okay y’all. I love me some horror. But saying the trailer for Rage: Midsummer’s Eve is in the “Top 5 horror trailers of 2015” when the year’s barely started? Kinda milking it a bit. Especially when said trailer is simply a bunch of young’uns running.  And running.  And running more.  Still, my 2014 “31 in 31” uncovered some pretty cool straight-to-vid films, so I’ll bite once it hits Netflix. Here’s the synopsis, as the trailer and the PR left that out:

American and British friends studying in Finland decide to take up an offer to travel to the Arctic Circle and experience the mysterious, pagan celebration of Midsummer’s Eve.

Am I the only one getting The Wicker Man spinoff vibes?

For my fellow horror fiends, feast your eyes on the press release.  And if you see it, lemme know what you thought…

LOS ANGELES, March 3, 2015 /PRNewswire/ — American horror film, Rage: Midsummer’s Eve, set in the Finnish Arctic Circle during the Summer Solstice, offers action packed, fast paced scares for all horror fans. The film premieres March 6th on selected Video On Demand platforms including Vimeo On Demand and VHX. Soon after this the film will also be released through other platforms, as well as in selected theaters in the US, and on DVD and Blu-ray internationally. 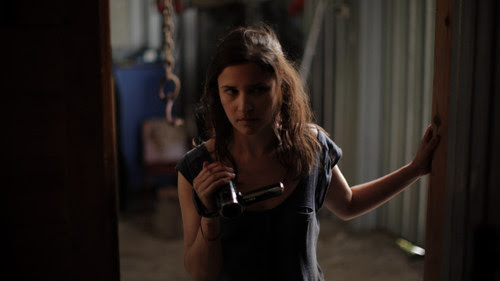 Rage: Midsummer’s Eve is directed by American-Finnish and African-American female director, Tii Ricks. This is the second feature film and the first adaptation on horror for the enthusiastic horror fan Ricks.

Featured amongst the Top 5 horror trailers of 2015 in a recent article by Moviepilot, Rage: Midsummer’s Eve offers a new approach to traditional horror films.

Commenting on the announcement, Ricks said, “Rage: Midsummer’s Eve is a tribute to all the greatest horror films I watched in my younger years. It is a traditional, American horror film with a twist: I really wanted the basic set up with people traveling somewhere and all the basic stuff people have seen so many times. That and hidden references to some of the greatest horror films in my opinion make up the most traditional part of the film. At the same time I wanted to bring in something totally new and throw the characters in a place never seen before in an horror film. The film is kind of like The Blair Witch Project meets Halloween – under the mystical Midnight Sun.”

The main cast for the film are a combination of fresh British talents and Finnish actors with international careers. The films stars Holly Georgia, Michael Vardian, Johnny Sachon, Greta Mandelin, and Christian Sandstrom.

Originally a pagan holiday, Midsummer’s Eve was a festival of the Summer Solstice in ancient times. Bonfires were lit to protect against evil spirits which were believed to roam freely when the sun was turning southwards again. Witches were also thought to be on their way to meetings with other mystical beings.