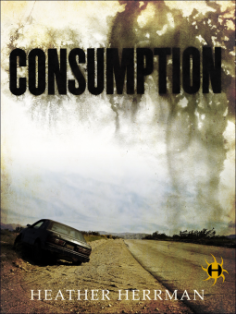 Nutshell: Believe the hype; Consumption is straight-up horror that echoes King, Koontz and Hill. Gory but not gross, and a page-turner once the first few chapters click into place. Required reading for horror fans. Get to it. Grade: A-

“For fans of Stephen King” is a statement I don’t take lightly.  Okay fine; I scoff at regularly.  But the combination of this tease plus the promise of a possession/small town takeover storyline intrigued me, so I took the bait.  And I enjoyed the hell out of Consumption.

Brief story?  Okay, it won’t get you anywhere near the depth of the plot but here goes.  A couple who are thisclose to the end of their relationship head to a new place to try to start over, but get sidelined by a busted car.  A young girl who hopes to shake her father out of the darkness that came after her mother’s death.  A young man who hopes for something more while being hemmed in by circumstance.  A sheriff that misses his ex-wife and young daughter.  And an old man who has the secret history of a small town written in a battered journal.  These folks and others find themselves in a small town with a crazy history that is coming around again.  And that thing that’s coming around again?  It’s hungry.

Herrman blends multiple storylines with ease, and gets you to feel for these characters.  No small trick with a Salem’s Lot sized cast of characters that all have their particular interaction with the thing that’s taking over their town.  I had a chilly thrill trying to figure out who would come out unscathed — if anyone would — and who would succumb.  With hints and red herrings thrown in for good measure, it’s not always easy to figure out, even for seasoned horrorhounds like me.  But what would be the real fun in that if it were?

Truth be told, I wavered during the first few chapters.  The characters were a bit too mysterious, their plans and back-stories too vague.  It felt as if the characters themselves were shaking me, saying “hey, we could be one thing, or the other!  And you don’t know us yet, so why care?”  But less than a tenth of the way in (I’m a sucker for Kindle’s percentage-meter), I was hooked.  Herrman’s ability to take the usual character cliches and twist them, combined well with the twists and thrills of her plot.  Add just enough gore to keep things interesting, and Consumption became less a simple read and more a page-turner I couldn’t put down ’til I’d finished it.

This book being scheduled to hit stores just in time for the summer beach season is kismet.  It’s just the chill-inducer horror fans will eat up in these hot, humid months.  Hopefully that’s the only scary thing they’ll be eating.

[Random House/Hydra, 2015.  I received an advance copy of this book from the publisher through NetGalley.  I received nothing for my review beyond the copy of the book.  Not even a blueberry muffin.  Probably for the best.]

Professional nerd. Lover of licorice.
View all posts by Denise →
This entry was posted in Books and tagged Book Reviews, Horror Books. Bookmark the permalink.