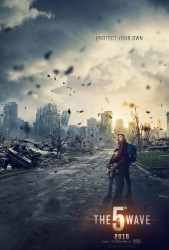 A movie franchise based on a crazy-popular YA trilogy of novels.  Sound familiar?  Oh yeah, Hollywood is definitely mining the Young Adult section of the bookstore right now.  And The 5th Wave is the newest book-to-film coming our way.

Based on the first novel of The 5th Wave series by Rick Yancey, this story deals with alien invasion, and its aftermath.  Very Falling Skies and The Host, and of course the required YA Love Triangle. Synopsis? Right here:

In the new film The 5th Wave, four waves of increasingly deadly attacks have left most of Earth decimated.  Against a backdrop of fear and distrust, Cassie (Chloë Grace Moretz) is on the run, desperately trying to save her younger brother.  As she prepares for the inevitable and lethal 5th wave, Cassie teams up with a young man who may become her final hope – if she can only trust him.

The trailer looks pretty impressive; this could be director J Blakeson’s breakout film. I hope so. Hey, I’m a sucker for apocalypse stories. The 5th Wave hits theaters in 2016.