“London Has Fallen”: second verse, same as the first 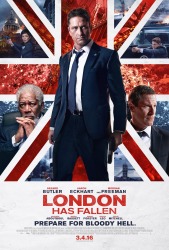 Nutshell: They could have subtitled this film “If you liked the first one, you’ll really dig this!”  London Has Fallen brings all the same grade-A destruction that Olympus Has Fallen rained down on moviegoers, but on a grander scale.  The buddy teamup of Butler’s Secret Service Agent and Eckhart’s Prez works great on the big screen, even if their abilities aren’t exactly believable.  Then again, nothing in this film is believable, save for the whiffs of intolerance here and there.  But hurrah for AMURICA, and hella awesome FX!  Grade: C+

Right off the bat let’s get one thing straight:  London Has Fallen is not high art.  In fact, it harks back to the ol’ boom-boom-pow American nationalism hyperdrive of films like Rocky IV, Independence Day, and every freakin’ movie Chuck Norris did. This is a movie where you’re supposed to eye people with even the faintest whiff of Middle-Eastern parentage with suspicion, and cheer when the inevitable good-guy payback hits hard.  From Morgan Freeman’s ID4-esque “vengeance will be OURS” speech, to Angela Bassett’s Single Tear Of Sadness, this film takes all the cliches, beats you over the head with them, and then sets them on fire.  In no way does subtlety or light-handedness come into play here.  London has Fallen is about big things, happening to big places, in a big way.

Like Don Henley would ask, are you with me so far?

Okay, so here’s the story: bad guys kill people.  Good guys survive, and kill the bad guys.  Sure, I could talk about the Secret Service Agent (Gerard Butler) who’s toying with retirement before a terrorist attack during a funeral attended by several big important heads of state (read: from countries we like) leaves most of those heads dead, and POTUS (Aaron Eckhart) on the run.  Why the attack?  Because a bad guy got hit by a drone strike years before, leaving his daughter – an innocent – dead on her wedding day.  Yeah, that feeling you just got?  It’s the screenplay playing whack-a-mole with your feelings.  And director Babak Najafi knows how to gather those feels, and crank things up to 11.  No, Olympus‘ Antonie Fuqua didn’t return to direct this one.  But Fuqua’s skill with layered characters would go to waste here; in London, everything’s black and white, good or bad.

But that’s not to say this movie isn’t fun, as long as you understand it for what it is.  And London Has Fallen is escapist entertainment of the highest (or lowest) order.  You don’t need to think because you know what’s coming next.  You don’t need to worry about nuance, because everyone’s painted with the same broad brush.  And being unable to follow the plot is not a problem, because it’s just Cowboys & Indians, except the cowboys are wearing suits, and the Indians are…well, still brown.  See?  Simple!

Now with all that, you may think I didn’t like London Has Fallen.  Far from it, sister.  I had a blast.  Why?  Because sometimes all I need is a mindless catharsis, and a happy ending with no ifs, ands or buts.  In the world of London Has Fallen, the good guys win, the bad guys lose, and the world is a bit dinged but will ultimately overcome what’s happened.  This film is like comfort food for the soul, as long as you don’t peer too closely into the whys and wherefores of the us-vs-them dynamic.  At least the baddie here is an arms dealer, not a vague “terrorist”.  Yeah, they still make him Middle Eastern, but just like John Wayne movies back in the day, the target for jingoism is the color of the day.  Is it right?  Well, that’s another article.  (Hint: nope.)

What’s else is good, beside the vaguely unsettling feeling of satisfaction I got when bad guys got mowed down like so much crabgrass?

Now if you’ll excuse me, kickass comfort movies that aren’t necessarily great for you demand similar comfort food. And there’s a pan of peanut butter cookies in the oven with my name on ’em.  FOR AMURICA.

Professional nerd. Lover of licorice.
View all posts by Denise →
This entry was posted in Movie Reviews and tagged #ActionPr0n, Movie Reviews. Bookmark the permalink.