[When the 2004 remake of The Stepford Wives hit theaters, I figured why not review the book by Ira Leven, and the classic film from 1975? Why not indeed. Enjoy this triptik from the dearly departed Green Man Review, originally published in October, 2007.] 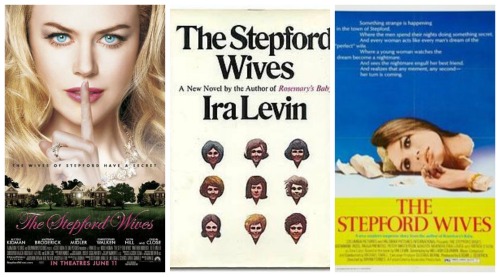 Something is definitely wrong in the bucolic town of Stepford, Connecticut. For one thing, the ladies have a fashion sense that dates back to the 1960’s. Then there’s the problem with their husbands; they look happy. Too happy. Maybe it’s because their wives are all so amazingly beautiful, and such whiz-bang housekeepers. Or perhaps it’s due to the fact that the ladies seem, well, built to please. No matter which way you look at it, Stepford is Trouble with a capital “T,” and that rhymes with “R” and that stands for robot.*

Yeah, I gave away the town’s shocking secret. My apologies to the handful of folks out there who didn’t already know. With Perennial’s paperback edition saying that “…the title itself has earned a place in the American lexicon”, I felt pretty safe in my belief that the surprise ending is no longer such a surprise. What is a surprise is the way the remake of the 1975 film (which was in turn based on the 1972 novel) has changed from a taut, suspenseful thriller to a parody of itself. Which is not surprising, given the release of “horror” movies like Scream and Scary Movie, but disappointing nonetheless.

First things first. Ira Levin’s novel was seen as satiric social commentary when it was first published. Male chauvinism was a pat catchphrase then, and Mr. Levin’s peek inside his version of suburbia brought the possibilities to the harsh light of day. Some folks wrote it off as a humorous look at suburban wives gone mad, but others wondered. Was the women’s rights movement creating a host of bitter men eager to keep the status quo at all costs? With Rosemary’s Baby already under his belt, Mr. Levin showed that he had a knack for delving under the picture-perfect world of WASP America and showing us what the quest for perfection could ultimately entail. This novel, which weighs in at well under 200 pages, could almost be called a novella. But Mr. Levin’s tightly-knit prose and undercurrent of urgency kept the brief story lodged in my mind long after I turned the last page. If only I could say the same for the 2004 movie. Ah, but I’m getting ahead of myself.

It wasn’t too long before Hollywood came calling. In 1975 a movie starring Katherine Ross as the newest female member of Stepford hit theaters, and although I understand it wasn’t a huge success, it has since become a cult classic. I have to say that I wasn’t all that impressed with the movie when I first saw it. I was about 12 or so, and they seemed to play it every other week on a local tv channel. Of course, back then I didn?t have to worry about becoming a wife. I was just a kid, and that kind of thing could never happen to me. Just a bunch of robots, no big deal. Not like they were werewolves or anything really scary.

Funny thing, time. When I sat down to watch it again just recently, it got to me. The Stepford Wives is a story that is aimed at adults. Watching Joanna Eberhart as she slowly comes to realize exactly what is going on in her community is reminiscent of the mystery that Rosemary Woodhouse unravels in Rosemary’s Baby. The paranoia that surrounds her when she realizes that things really aren’t perfect, in fact, things are a woman’s nightmare, is palpable. And as Joanna’s friends (played at first with verve, then with mechanical precision, by Paula Prentiss and Tina Louise) change before her very eyes, her sense of isolation comes through. The idea that you could be replaced by a robot and your husband would look forward to the change was something that was worlds away from me. As a child, I just didn’t get it. I do now. And the original movie stands as an excellent complement to the novel in tone and suspense.

Yes, the female characters in this version are a bit too gung-ho in their pursuit of “women’s lib”, but that can easily be explained by the time period. And sure, the costumes are a little overdone, but considering the fact that the “maxi” skirt was popular back then, it probably wasn’t that startling a change.

On to 2004. Hollywood, mining older movies in hopes of remaking them for mucho box office gold, decided to “re-envision” Stepford and play it for laughs. At least I think so. It?s kind of hard to tell if that’s what they were going for, since it shifts gears so often. Labeled as a comedy/drama/thriller, it just doesn’t hit the mark with any of the genres. With and all-star cast, you’d think this movie would be a slam-dunk. Unfortunately, they missed the mark.

Nicole Kidman takes over the role of Joanna, tough-as-nails tv executive, with Matthew Broderick as her long-suffering lesser half. When Joanna gets fired from her position, the family picks up and moves to Stepford in hopes of a better, quieter, life. This time a token gay couple replaces the token African-American couple from the book and the original movie version, showing that anyone can fall prey to the pursuit of perfection (or the subjugation of an uppity spouse). Since this is the new millennium, there is a different ending that what has gone before, and while it satisfies in a Hollywood way, it takes away the sense of foreboding that had haunted me. All that was left was a film that gave me a few laughs, but was as forgettable as any other standard blockbuster-wannabe.

The movie is beautifully shot, and Stepford looks like the greenest, prettiest place you’d never want to live. Costuming is similar to the 1975 original, but since house-dresses and floor-length skirts are no longer in the general fashion, the change from career-woman to super-housekeeper is a bit more marked. Out of style or no, they are beautifully done. Special effects are, of course, much better now, and they are used briefly, with mixed results. The inclusion of a “robotic” dog, for instance, just screamed “look – it’s CGI!”

If I have to put this movie into a category, I’ll stick it in “date night friendly”. This is the kind of movie that won’t have your date discussing its fine points until the wee hours of the morning, so you can get on with the important business. Like what to order for dinner. Get your mind out of the gutter.

One last thing. Is anyone else here creeped out that Frank Oz , beloved puppet . . . er, Muppet master, directed the remake of The Stepford Wives, which is about turning women into robots? Maybe I’m just paranoid. But you can bet your life that if I ever get married, I’m gonna take a good, hard look at any suburb my husband picks out. You know, just in case.

*Apologies to The Music Man – I just couldn’t help myself.

The current movie version has a Web site that allows you to see what you would look like if you were “overhauled”. It also has a section called “Your New Neighbors”, which provides hilarious (or scary?) bios of Stepford denizens.