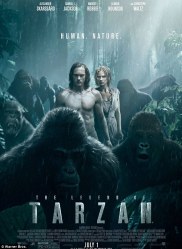 Nutshell: This new Tarzan brings the Saturday morning serials into the 21st Century, and looks awfully spiffy doing it. CGI is on point, the actors dig into their roles nicely, and even the animal behaviors feel authentic.  Sure the plot is wafer thin, and needs serious padding to justify its feature film length. But this ain’t rocket science, and it ain’t high art; it’s Tarzan.  Enjoy it.  Grade: B+

“Lord Greystoke, let me tell you about the Congo situation…”

For folks who remember The Time Before Cable, DC’s Channel 20 used to show classic movie double features every Sunday morning.  Okay, I thought they were classics, but perhaps “B&W films they could afford” better fits the bill.  Typically, there was an Abbott and Costello film followed by something spooky or monster-y, with Tarzan swinging in from time to time.  And I loved those old Tarzan films, which usually starred Johnny Weissmuller, who my parents assured me was a huge swimming sensation before he made his way to film.  There was something fun and comforting about those films, with the gorgeous Maureen O’Sullivan as Jane, and the curly-headed Johnny Sheffield as “Boy”.  They were fun, they had lots of animals to ooh and ahh over, and of course there was Weissmuller’s famous Tarzan yodel-yell.  Good times.  The Legend of Tarzan has that same feel.  It harks back to those lighthearted jungle double-features, while adding a depth to it thanks to modern day whole-picture inclusivity.  We not only get Tarzan and Jane’s troubles, but a look at how the story affects the animals and tribes around them.  Pretty sweet upgrade.

It’s the late 1800s, and John Clayton, Lord Greystoke (Alexander Skarsgård) is sitting at what looks like a hideously boring meeting.  A group of suits wants him to visit the Congo, at the invitation of the King of Belgium, who rules the area (what I’m guessing is the Congo Free State, known for its violence and economic exploitation.) Clayton doesn’t want to go, even though the token American (Samuel L. Jackson, our Everyman on this adventure) pulls the T Card.  Because of course, Clayton is Tarzan, “King of the Jungle”, whose adventures are known worldwide.

But there’s two things wrong with this picture; Clayton knows tribal chief Mbonga (Djimon Hounsou) will try to kill him if Clayton returns.  And Belgian emissary Leon Rom (Christoph Waltz, putting the eeeev in evil) is in league with Mbonga, hoping to trade Tarzan for a cache of Mbonga’s diamonds, which would help bail out nearly bankrupt King Leopold and keep his ideas for the Congo afloat (hint: massive resource exploitation and total enslavement of the native population.)  Naturally, Clayton gets talked into going by his loving wife Jane (Margot Robbie), who is dying to get back to where she grew up with her researcher/educator parents, and where they first called home.  It’s been eight years; can Tarzan and Jane get back, save the Congo, and avoid becoming Mbonga meat?  Um, Tarzan & Jane.  OF COURSE THEY CAN.  The fun is in the how.

Director David Yates (Harry Potter and the Deathly Hallows) brings some of the magic – heh – from his work on four Potter films to this story.  There’s an intimacy even in the most sweeping of scenes, something he’s been doing well for years now.  I dig how Legend begins with Tarzan/Clayton/Lord Greystoke distancing himself from his beginnings.  Here’s a man who left the jungles of Africa for London, but still carries the scars of his rugged upbringing.  Exactly why he’s so adamant about staying a Lord in London isn’t fully explained; there’s Mbonga, and a brief mumble about Jane losing a child.  But after some give-as-good-as-you-get arguing between Clayton and Jane, they’re off to the Congo.  We see his backstory through a series of flashbacks that are intercut with the main story, and that way of giving us a peek here and there rather than throwing all that raised-by-apes mythology at us at once makes this Tarzan a bit more believable.  Of course, some of the animal interactions are straight out of the Don’t Try This At Home Kids Handbook.  (And it’s sad that in the 21st Century there are people that need that kind of reminder…)  But in-between rubbing heads with lions, communing with ostriches, and bonding with apes, the basic body language and behaviors of these animals seem realistic.  Hey, I’ve watched Animal Planet.

And while we get to bond with the animals on a personal level – there’s a definite Greenpeace vibe up in here, and I’m alright with that – there’s plenty of Snidley Whiplash in the Congo too, courtesy of Waltz’s quiet but sinister performance.  In fact, the entire cast does an excellent job of bringing this tale to life.  Skarsgård’s Tarzan is one who’s torn between keeping his wife safe and the life he yearns for.  Robbie’s Jane, who’s every bit Grrl Power as the next 21st Century heroine, but has a love of husband and the Congo that grounds her.  Even Jackson and Hounsou, as the guy who’s seeing it all for the first time, and the man whose desire for vengeance eclipses his ability to see he’s making a deal with the devil, are given parts that are more than just cardboard cutouts.  Jackson’s George Washington Williams is trying to help Tarzan, and trying to balance the scales after his participation in another genocidal slaughter; his post-Civil War mercenary work against the Native Americans.  And Mbonga isn’t just a bad guy, he’s a grieving father whose only way to get past the pain is to focus on something – rather, someone – else.

I’ve got to give it to the makeup FX department here.  They cover Skarsgård with a road map of scars that show exactly how brutal living in the jungle can be.  It’s a nice touch, and one that’s never really been addressed until now.  The CGI is amazing; with films like this, the Planet of the Apes series, and Jungle Book, there’s no more room left for so-so animal rendering.  It’s absolutely amazing what they’ve done here, and to be honest with a Tarzan film there needs to be top-notch gorilla effects.  And they’re here.  [NOTE: in all fairness, here in Legend these apes aren’t gorillas.  They’re the Burroughs created species called Mangani, known for their heightened intelligence.  Don’t worry though, unlike Burroughs’ books, the Mangani don’t speak in this film. Thank goodness.]

Naturally, as this is a Tarzan story, there’s plenty of stuff to scoff at.  Wildebeests stampeding through buildings?  A man strong enough to snap a thick woven cord of Golden Orb-Weaver spider silk?  Ants used as stitches?  Okay, maybe that last one’s kinda accurate. And yeah, the brief “Save Jane” storyline may be buoyed by a nod to the tribesmen who have also been kidnapped, and the idea of saving the area in general. But it’s still Save Jane.  Yet Legend is all in good fun.  And make no mistake, this film is fun.  The Legend of Tarzan is a great way to spend a weekend afternoon, or anytime you’re down for a fun bit of fancy well made and well acted.

Professional nerd. Lover of licorice.
View all posts by Denise →
This entry was posted in Movie Reviews and tagged Movie Reviews. Bookmark the permalink.