7 Pieces of: “The Light Between Oceans” 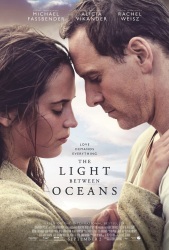 Story: WWI veteran Tom (Michael Fassbender) tries to leave behind the horrors of war by becoming a lighthouse keeper.  Meeting and falling in love with the beautiful, spirited Isabel (Alicia Vikander) starts to turn his life around. Until one miscarriage after another plague the couple. A baby that washes ashore seems like the answer to their prayers. But baby Lucy’s real mum is out there, somewhere…

Remake, Sequel, Based-On, or Orignal: based on M.L. Stedman’s 2012 novel of the same name.

Gotta say: Fassbender rocks the 1918 haircut-n-mustache look. Nails it, in fact.  And if I had a moment in Vikander’s gorgeous turn-of-the-20th-Century lace & embroidery?  I still wouldn’t be able to fit in ’em, but a gal can dream.

Oh, the movie?  It’s just as lovely as Isabel’s outfits.  Wide shots of the lighthouse at sea are so picture-perfect I dream of having them as my desktop image.  Cinematographer Adam Arkapaw won the American Society of Cinematographer’s Spotlight Award for his work on 2015’s Macbeth, and it wouldn’t surprise me if he got recognition for his work here too.  Director Derek Cianfrance (Blue Valentine) uses his skill at the slow-build to paint a picture of a perfect marriage slowly coming unraveled by a horrible secret one is forced to keep for the love of the other.  Fassbender’s Tom is a good guy who’s SOP is doing the right thing.  But when Isabel slowly breaks down after her miscarriages (OMG it was probably Rh factor incompatibility…but nobody knew back then) he’s torn between doing the right thing, and doing the right thing by her. His paladin definitely feels the sting of guilt, and it consumes him.

And these two actors are absolutely breathtaking in their roles. From their meet cute to their adorable, beautifully shot honeymoon phase, to their literally storm tossed dark night of their souls, Vikander and Fassbender are marvelous.  And while Fassbender’s makes Tom’s inner war seem easy to convey (and with those layers, it’s definitely master-level acting), it’s Vikander’s devastated Isabel that does much of the emotional heavy lifting here.  It’s amazing to know that in real life she’s never had a child; her scenes where Isabel miscarries could pull blood from a stone.

And I’d be amiss if I didn’t mention the other mother in the room; as Lucy’s biological mother Hannah, Rachel Weisz (The Constant Gardner) had me torn.  As much as I loved Tom and Isabel, Weisz’s Hannah is a woman trying to stay strong, but failing.  It’s a performance that could have been simply pitiful, but there’s a backbone in it that lifts it above the usual maudlin weeper. Sure, there are times in this film that feel a bit too tailor-made for tissues.  But the stellar cast and beautiful scenery lets those scenes flow nicely with the rest.

This film is one of those that is a perfect jumping point for heavy conversation after the film.  What’s right?  Whose version of right should be the correct one?  What does it take to let go, or to hang on?  And of course the ideas of PTSD after World War I.  I want more movies about/set around WWI.  I want more movies as delicately lovely as this one.  Hopefully Oceans will see the start of a trend in both these areas.

#Protip: Vikander joined the cast because she’d always been a fan of Fassbender’s work.  After meeting during this film, they became fans of each other; they’ve been dating since 2014. #adorable