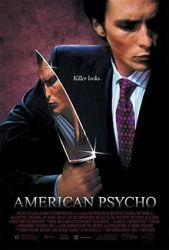 “I think my mask of sanity is about to slip.”

Story: Entitled yuppie scum are bad. Sociopathic yuppie scum are worse. Just ask perfectionist 27 year old psycho, Patrick Bateman. Just don’t visit his place to do it; you may not make it out alive.

Scares: A few, because you never know what Patrick will do next.

Closing scene “shocker”?: Not really. But like the book, there’s a sense of ambiguity.

Remake, Sequel or OG (Original Ghoul)?: From the 1991 novel by Bret Easton Ellis.

Trick or Treat?: Campy, bloody fun that’s swung back around to topical. Granted the “Greed is Good” yuppies of the 80s and 90s have aged out of relevance, but there’s a certain subset of Millennials that are just as fascinated by the right things, done at the right time, in the bright light of conspicuous consumption. Ironic lumberjack beards and fair trade kombucha may have replaced power suits and $500 appetizers, but the idea of out-doing your peers and staying relevant is still very much a thing.

I’m actually surprised nobody’s done a Millennial remake of this movie; a cast of too cool for school young adults, with a psycho in the mix – who may be the sanest man in the room – would be fun to see. Til then, seeing my fellow GenXers spiral down the blood drain on a raft of money is fascinating, horrifying, and thick with dark humor.

As Patrick, Christian Bale is icy  detached perfection. And Ellis’s words ring true through Bale’s matter-of-fact narrative. Shout out to Samantha Mathis, Josh Lucas, Reese Witherspoon, Chloé Sevigny, and Jared Leto. But as cleverly banal as their performances, there are too many scenes that seem flat, along with a strangely empty feeling subplot with Willem Dafoe as a detective looking for one of Patrick’s victims.

Ellis’s story translates well to screen, but there’s that same sense of uncertainty, of not really believing Patrick’s point of view. Then there’s the mistaken identities, how nobody can give enough of a crap about anyone other than themselves to really see who’s around them. That makes American Psycho a fascinating, but strange, film.

Straight up horror? You could argue either way. Horrifying? You betcha.

Professional nerd. Lover of licorice.
View all posts by Denise →
This entry was posted in 31 in 31 and tagged 31in31, Book to Film, Horror Movies. Bookmark the permalink.