“Beauty and the Beast” – a beastly good live-action adaptation 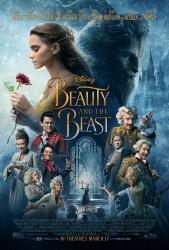 “A life sentence for a rose?”

Nutshell: Like Jungle Book before it, Beauty and the Beast is a live adaptation that is quite possibly even better than the original. Grade: A

Story: A girl that feels like an outsider in her “Provincial town” decides to offer up herself as a substitute when her father is imprisoned by a Prince…a quite beastly prince indeed. At least, at first. A Stockholm Syndrome as old as time? Well, I like to think of it as the sweetest meet-not-so-cute story you’ll ever see. Try the grey stuff, it’s delicious!

Remake, Sequel, Based-On, or Original: A live-action adaptation of Disney’s 1991 animated classic, which is an adaptation of the classic fairytale by Jeanne-Marie Leprince de Beaumont.

Gotta say: First thing; THERE IS NO BIG GAY THING IN THIS FILM. Full stop.  So anyone who’s going ape over the fact that a character is gay in this Beauty needs to sit right on down and get real. Director Bill Condon is sick of all the blather about this, and so am I. And honestly?  The “big gay thing” is in fact a little nuance of a thing that will sail over most kids’ heads (and would have sailed over the heads of most adults, except for the conservative brouhaha.)

Ahem.  So on we go.  Beauty and the Beast, live version.  Good.  Stuff.  As much as I adore Emma Watson – and Dan Stevens in Downton Abbey – I worried a bit when I first heard this was getting a live action re-do.  Then Cinderella and The Jungle Book happened.  So I breathed easier and relaxed into a sweet anticipation. And Beauty delivers the goods.  Disney is getting better and better with their live adaptations, so I’m glad they waited to get a few others under their belt before Beauty; the attention to detail, casting, and overall feel of the film is everything fans of the original could wish for.  More even.

How?  Because this time, Belle is a bit more…real.  No, not because Watson delivers a spot-on performance (she does, but more on that in a tic.) It’s because she’s a more realistic portrayal of an “outlier” than the animated version.  This Belle wears boots, because she’s walking a lot.  No thin flats that’ll wear out in no time for this girl.  She’s even got on pantaloons in town, instead of mounds of skirts.  Sure, she gets gowned-up at the castle, but in a rural town where she’s tasked with helping her father with everything?  Makes more sense, and gives the character even more of a doesn’t-fit-in vibe from the start.

Speaking of looks and feels, the set decoration, costuming and overall production design is absolute perfection.  From the dusty, crowded town tavern to the glorious ballroom at the castle, every scene is infused with such a loving respect for detail it’s astounding.  One of the reasons I’d like to see it again is because I’d love a chance to sit back and soak it all in.  A particular bravo to costume designer Jacqueline Durran for her breathtaking work.  From Gaston’s greatcoat to Beast’s tatters, the baker’s work threads to Belle’s gorgeous gowns, they’re all wonderfully done and true to their characters.

The characters all get a subtle tweak here and there thanks to writers Stephen Chbosky and Evan Spiliotopoulos, but those slight touches that fit with the live action setting.  Belle is more hands-on with her father’s inventions, even whipping up one herself.  She also tries to teach other girls how to read, which of course doens’t go over well.  This is Belle as fairytale #resistance-gurrrl, someone who thinks outside the box.  And that helps make the love story feel a bit more realistic (as much as a Beast/human love story can); of course Belle would consider Beast.  She sees what most close-minded townsfolk cannot.  It helps that Kevin Klein plays her father Maurice, a man who raises Belle to be her own woman, and encourages her free spirit.

Dan Stevens does a wonderful job voicing (and motion-capture acting) Beast, getting across the hurt, pain, and loneliness of the man-turned-monster.  But Stevens also embodies the sly humor, hope and love that grows in the character’s heart.  And the CGI is brilliant.  In fact, it felt much more real than that used for Lumiere; while Ewan MacGregor does an amazing job voicing the character, there were plenty of times when that character’s animation was a bit too…perfect?  Shiny?  Dunno, but couldn’t help but feel a little off every now and again.

So, kids will really dig this movie, right?  Not so fast, Super Parent.  This is a PG rated film, and there are several points in the film where young ones could be frightened.  Scenes where a pack of wolves descend upon Maurice at the beginning of the story, and another where Belle is alone in the woods, could be too much for sensitive young ones.  And naturally extremely wee ones could be terrified of Beast at first.  The animation is much too lifelike for the very young to differentiate between Peeta’s real/not real here.  So if you’ve got little ones who could be freaked out, either think about holding off ’til the Blu-ray, or sit them down, watch the trailer together, and discuss what they might see, and how they might help themselves remember it’s just a story when things get spooky.

Otherwise?  Come sit down!  Enjoy the Busby Berkley of the dinner scene, the glorious moment when Belle decides to help Beast, and of course all that gorgeous singing!  Yeah, we all joke about the Stockholm Syndrome trope.  But with this Beauty and the Beast, the parallels are less clear.  This time, it’s a story about two…individuals…that become companions, then friends, then more, as they get to know each other better.  How actions can be forgiven, moved past, and built upon as long as there’s understanding and acceptance on both sides.  How hope for a happy ending can take hold, even if everything started with a horrible mess that got out of hand.  Isn’t that a lovely thought?

Oh – one more thing. Don’t grab your coat and settle your trash during that final dance scene; you’ll want to hear the priceless (and super quick) back-and-forth between Belle and the Prince.  Trust.

Professional nerd. Lover of licorice.
View all posts by Denise →
This entry was posted in 7 Pieces Of and tagged Beauty and the Beast, Disney, Get Over It People Are Gay FFS, Movie Reviews. Bookmark the permalink.