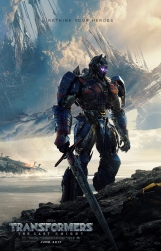 “You want to know, don’t you?  Why they keep coming here?”

Yes.  Yes I do.  Okay I’ll admit it; as much as I adore Michael Bay Go Boom, I’ve been wondering if the Transformers franchise was overreaching with the newest film in the franchise.   But it looks like another fun romp through the wilds of CGI, and hello – ROBOT DINOSAURS.  So what do I think?  I think I’ll be checking it out. Synopsis!

The Last Knight shatters the core myths of the Transformers franchise, and redefines what it means to be a hero. Humans and Transformers are at war, Optimus Prime is gone. The key to saving our future lies buried in the secrets of the past, in the hidden history of Transformers on Earth.  Saving our world falls upon the shoulders of an unlikely alliance: Cade Yeager (Mark Wahlberg); Bumblebee; an English Lord (Sir Anthony Hopkins); and an Oxford Professor (Laura Haddock).

There comes a moment in everyone’s life when we are called upon to make a difference.  In Transformers: The Last Knight, the hunted will become heroes.  Heroes will become villains.  Only one world will survive: theirs, or ours.

Professional nerd. Lover of licorice.
View all posts by Denise →
This entry was posted in Trailers and tagged Michael Bay, Trailers, TrailerWatch. Bookmark the permalink.