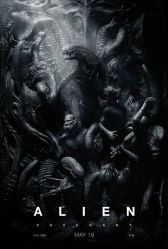 Sometimes I’m too lazy for a full-out piece. Sometimes everything I’ve got to say about a film can be summarized in a sentence or two. Sometimes it’s both. So herewith, a quick-n-dirty on Alien: Covenant!

Nutshell: While Covenant abuses the Stupid People Doing Stupid Things trope, meditations on life, humanity, and creation give the story just enough heft to keep things interesting. Covenant answers a few questions left hanging from Prometheus, while giving us more to wonder about for the inevitable next film.  Grade: B

Before: Oh Gods.  Prometheus was a sloppy mess.  But it did have an alluring mythology hidden under all that WTF.  And the trailers for Covenant show xenomorphs!  A’ight, I’m in for it.

During: Well’p.  Ridley Scott still seems to love keeping audiences in the dark as to what the everlovin’ hell is going on.  Still, there’s a camaraderie to this group of soon-to-be-xenomorph-fodder that harks back to the original film.  I’m digging it.  And that Michael Fassbender is so physically perfect, he was born to play an android.  (Ditto for Alicia Vikander, but as we’re talking Covenant I’ll stick with Fassbender for now.)  He can even rock the hell out of a grown-out ombre Jared Leto-esque sloppy pageboy.

As the Covenant is a “colonization vessel”, am I the only one looking for Chris Pratt and Jennifer Lawrence to pop out of a couple of pods? Speaking of the vessel itself, I dig the believable tech, especially those awesome solar sails the ship uses to recharge.  In space, nobody can find a gas station.

The art direction and cinematography is…okay.  But for a look at how things really began, I was hoping for more than the usual Ridley Scott shades of grey (with occasional splashes of red.)  The gory FX walk that fine line between subtlety and in-your-face.  Boyfriend knows when to pull the camera away, and when to zoom in.

After: That was a decent blend of characters doing stupid stuff and tantalizing bits of xenomorph creation/evolution/adaptation.  I’ve still got a hollow where real feelings for this film should be, but at least I’m not mad that the ending was a clusterfuck like I was with Prometheus.  (SERIOUSLY WHO CAN RUN AND JUMP IMMEDIATELY AFTER A HYSTERECTOMY? Ahem.  Sorry.)

I really loved the ensemble vibe of the cast; Katherine Waterston, Billy Crudup, Danny McBride, Demián Bichir, Carmen Ejogo…they all blended into a believable crew.  And people who didn’t think Danny McBride could pull of horror can suck it.  He delivered a great performance here.  Hoping to see more of these types of roles from him.  (What?  I’m a horror nerd. Plus, after this I’d really like to see him flex his dramatic chops.)

The story was intriguing, but the screenplay was messy.  It’s as if it was either edited so deeply that hunks went missing, or the writers knew the story so well that they forgot to actually put the meat of it on the page.  It was fun taking note of all the times a character would do something stupid.  Then there’s the big stupid; risking the lives of their paying customers in hypersleep simply because the crew wants to check something out.  Ahh, horror!  I love you so.

I just wish this film had done a better job telling us what was going on during the action.  There’s only so many times I can press the “wait, WHAT?” button in my brain before I start to feel put out.  With Covenant, it feels like they’ve scrapped the story they built with Prometheus, and are taking off in a new direction.  Great idea, but what about the original mission Elizabeth Shaw and David set out on? Ah well.

Professional nerd. Lover of licorice.
View all posts by Denise →
This entry was posted in Movie Reviews, Review In A Flash and tagged Alien franchise, Horror Movies. Bookmark the permalink.