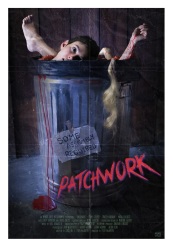 “Given the massive tissue loss and the fact that this is fucking impossible, I’m sorry but I think you’re stuck like this.”

Story: three women become one woman after a guy cuts them up and sews parts of them together to make the “Perfect Woman”. Let’s just say they’re not happy about that. What’s next? Revenge on the weirdo who did this to them, of course!

Remake, Sequel or OG (Original Ghoul)?: Kind of a spin on Frankenstein, with a Grrl Power – Monster Power? – POV.

Trick or Treat?: Yeah, this is a weird one.  But damn if it isn’t a bunch of fun.  Director Tyler MacIntyre manages to come up with a preposterous premise and throw out winks to the audience that lets you know that everyone – including the characters – knows how preposterous this is.

As Jennifer, the “main body” and in-charge personality, Tory Stopler is great with body movement, and the beginning scenes where the three personalities are trying to get parts from three different bodies to move as one is outrageously outstanding. Viewers do get to see all three “personalities”, as they “live” in a sort of Herman’s Head (LOOK IT UP) existence.  As the combined Franken-women, Stopler, Tracey Fairaway, and Maria Blasucci bicker, bond and plot, with great onscreen chemistry and a knack for physical humor.

Yeah, there’s a whole lot of gore in this – think Frankenstein Meets Hershell Gordon Lewis – but the slapstick and fun Girl Power message makes it campy rather than a gross-out.  Lightweights still may want to skip the popcorn though. Me?  I had pizza.  Because pizza is delicious.

Professional nerd. Lover of licorice.
View all posts by Denise →
This entry was posted in 31 in 31, In Horror, Movie Reviews and tagged 31 in 31, Horror Comedies, Horror Movies. Bookmark the permalink.