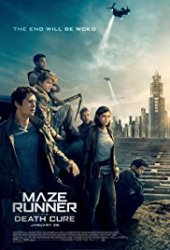 Nutshell: A fun ride, if you ignore the fact that this final film in the Maze Runner series is a tangled mess of cliches and overused tropes. I wish I could say I enjoyed the ride, but I was too bored with the scattered plot to do anything but shove popcorn into my gaping maw, and drool over zombie FX (and Aiden Gillian, of course).   Grade: C-

“When the hell does it stop?”

Story: Uh, I’ll pass on this one.  Something about the “Gladers” and Co. rescuing a friend, and then…? Boom, rage zombies, boom.

And this film does grab you with the actioness straight away.  But while I enjoyed the “moving train heist” opening scene, I enjoyed it a helluva lot more when I saw it in Fast Five. While I know viewers are supposed to root for our gang of “Gladers” to succeed, apparently between the first film and the final installment these guys and gals graduated from the Jason Bourne School Of Athletics.  Each and every one of the characters in this rescue mission are not only incredibly adept at everything, but they can anticipate each other’s movements and figure out where things will end up they’re psychic.  And of course, the bad guys must have used their free time between films to attend the Stormtrooper School Of Bad Aim, scoring the best of all classes to date.

Death Cure also lifts a lot of their scenes with “Cranks” – the Maze Runner version of infected (think 28 Days Later instead of The Walking Dead) – from post-apocalyptic films we’ve seen before.  There’s even a scene in a tunnel that felt like a mashup of The Stand and Resident Evil.  Good stuff, but with such an incredibly intriguing concept in the first film, Death Cure limps to the finish line on the shoulders of other films.  That’s not so bad; films typically rip off earlier work. That it’s so obvious here is the real killer. Oh, and I can’t to mention all the meaningful slow motion walks, and overly drawn out “stepping out of the shadows” moments.  Yawn. I wouldn’t have minded all that, except the plot seems to jump around and twist so often I wondered if the ghost of Little Richard haunted the crew.

With so much ripped off from other stories, why’d I give this film a C- instead of an F?  Because I love the cast.  Dylan O’Brian lifts this generic genre fare just like he did with Teen Wolf. Patricia Clarkson is always a joy to watch, and as the head of WCKD, she infuses her character with subtle pangs of conscience that seem to grow as the story progresses.  And if you don’t have a soft spot for Love, Actually‘s little drummer boy Thomas Brodie-Sangster, you’re dead inside. That these actors could deliver the cheesy, wooden dialogue with sincerity nods to their talent.

If you’re a trilogy completist like me, go see Death Cure.  If you’re down with a whole lot of action and can take a messy plot, go see Death Cure.  But if you want an interesting film, re-watch Maze Runner. Heck, even Scorch Trials delivers more video game-esque fun.  It’s too bad that a story with so much promise sputters at the end.

#Protip: If you’re getting deja vu all over again, you must be a Game of Thrones fan.   Aiden Gillan (Janson) Thomas Brodie-Sangster (Newt) and Nathalie Emmanuel (Harriet) have all played the Game, as Littlefinger, Jojen and Missandei, respectively.

Professional nerd. Lover of licorice.
View all posts by Denise →
This entry was posted in 7 Pieces Of and tagged Maze Runner, Trilogies. Bookmark the permalink.