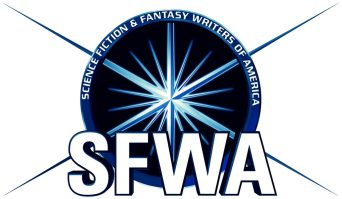 The SFWA – that’s Science Fiction and Fantasy Writers of America – feel our Claritin pain.  And they’re ready to help us out by giving us a bundle o’ books. And when I mean bundle, I mean BUNDLE. Great books like Don Sakers’ A Rose from Old Terra, Cygnus Rising by Craig Martelle, and Fluency by Jennifer Foehner Wells.  Basically there’s something for everyone here, and a whole lot of really good stuff.  It’s what you’d expect from the folks that give us the Nebula Awards?

The best part of all?  You get to set the price you want to pay!  That’s right – much like Humble Bundle, it’s all up to you.  So no crying poormouth this time; you want ’em?  You can have ’em!

This bundle will be available from May 9th through May 24th, 2018, so mark your calendars! Read on for the full list of incredible books!

A bundle so packed full of space opera we had to assemble it in orbit.

SFWA will make the storybundle available from May 9th thru May 24th.

SFWA is an organization for published authors and industry professionals in the fields of science fiction, fantasy, and related genres. Founded in 1965, SFWA informs, supports, promotes, defends, and advocates for its members. We host the prestigious Nebula Awards at our annual SFWA Nebula Conference, assist members in legal disputes with publishers, offer the Speakers Bureau, administer grants to SFF community organizations and members facing medical or legal expenses.

Novice authors benefit from our Information Center and well-known Writer Beware site.  Between online discussion boards, private convention suites, and a host of less formal gatherings, SFWA is a source of information, education, support, and fellowship for its members.

StoryBundle is a way for people who love to read to discover quality indie books written by indie authors. You know how it’s always hard to find something good to read? StoryBundle hopes to solve that.

We take a handful of books and group them together to offer as a bundle. Then you, the reader, can take a look at the titles we’ve chosen and decide how much you’d like to pay. Think of us like a friend that scours independent books for undiscovered gems, then bundles these titles together for one low price that you decide. Yeah, we mean it; you get to set the price that you want to pay!

Fluency by Jennifer Foehner Wells:  An expedition to a derelict alien ship spirals into chaos and linguist Jane Holloway must decide if she can trust an alien’s help to survive.Fluency won the Gold in the Fantasy/Science Fiction category of the 2015 eLit awards.

Enemy Unknown by Mike Shepard: The war is over, so why are merchant ships still vanishing? Is it pirates, or is humanity no longer alone in the galaxy?

Rika Outcast Micheal Cooper: Rika is mech-meat, a cyborg killing machine, created by the Genevian military and cast aside when the war was lost; she wants to build a new future for herself, but hope doesn’t buy repairs, and Rika will find her fighting another people’s war just to stay alive.

Cygnus Rising by Craig Martelle: From space they came, to space the returned, humanity searching for a way home.

Storm Divers by Terry Mixon: Adam Hale thought diving deep into Jupiter’s atmosphere was the most dangerous thing he could do, but that was before a beautiful spy that hated his guts came looking for him.

Troubled Space by Amy Duboff: Aspiring smuggler Jack Tressler is subscripted into a pirate gang where ambitious heists, poor planning, and food-related distractions are a way of life in this farcical space opera adventure.

CrapKiller by Felix R Savage: She was expecting a holiday on Ganymede … not a vermin hunt.

Accord of Honor by Kevin McLaughlin: A retired admiral and a young spaceship captain are all that stands between a defenseless Earth and those who would take total control over all of humanity.

Ithaka Rising (Halcyone Space, book 2) by LJ Cohen : After a reckless young computer programmer resurrects the damaged AI on a long dormant freighter, she and her accidental crew blunder into a galactic conspiracy forty years in the making.

A Rose From Old Terra by Don Sakers: A group of far-future librarians travels to a distant part of the galaxy to save civilization.

The Dark Between by Stephanie Bedwell-Grime: A dark mystery lurking on a derelict spaceship leads to a desperate fight for survival.

Qualify by Vera Nazarian: Nerd, geek, and awkward smart girl Gwen Lark must compete against other Earth teens, including her high school crush Logan Sangre, in order to Qualify for interplanetary rescue from an asteroid apocalypse in this high-octane dystopian thriller from a Nebula Award Finalist, in the vein of DIVERGENT and THE HUNGER GAMES, and winner of The Fiction Awards 2016 on Wattpad.

Some Distant Shore by Dave Creek: Two star systems are colliding, and Mike Christopher of the Earth starship Asaph Hall is rushing to unlock their mysteries, even as two alien races on the journey are keeping their own potentially deadly secrets.

Nothing Left to Wish For by  Andrew G. Schneider: Step onto the deck of the skyship, the Pirate Queen and join first mate Esmeralda, Prince Sasha, and the genie Sting on a spectacular voyage across the Endless Desert.

Professional nerd. Lover of licorice.
View all posts by Denise →
This entry was posted in Books and tagged Books, Science Fiction. Bookmark the permalink.