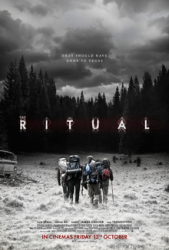 “Whatssup, you scared of the woods?”

Story: Four friends “since UNI” go out for a hike in Sweden, after the fifth member of their gang dies tragically. One guy twists his ankle (because there’s always that one friend), and to cut their hike short, they decide to cut through the woods instead of sticking to the trail. Great idea!

Splat factor: Depends on what you consider splat. Lots of blood, several bodies, gutted animals strung up in trees, but almost all of it is from a distance and/or at night.

Remake, Sequel or OG (Original Ghoul)?: Based on the novel by Adam Nevill, and bits of Norse mythology.

Trick or Treat?: The Wicker Man and The Blair Witch Project meets The Witch (The VVitch?)and The Big Chill in this atmospheric chiller. I dare you to watch this with the lights out. I double-dog dare you.

The Ritual is one of the best “new horror” films I’ve seen in a while. I was transfixed. And, I’m not ashamed to admit, slackjawed at times. I put this on figuring it’d be a good one to knock out while working on a crochet project. What? I’ve picked some clunkers lately. But  I never even glanced at my yarn. You’ll want to keep your eyes on the screen, because every so often you’ll see something the men don’t. And it’s creepy goodness. Dramatic irony at its spookiest.

While I typically hate stupid characters in horror movies, Ritual takes the idea of groupthink and turns it into something believable. One friend keeps trying to tell everyone else that “in the morning we should go out the way we came”. Smart man. His friends hate the idea though. It’s the horror movie equivalent of trying to get your buddies to pick a place for dinner; the most forceful person wins. Except by “a place for dinner”, here I mean “a place where you’ll be dinner”.  This also helps answer the usual question of why the group doesn’t simply backtrack once things go wobbly; they’re all going with the person who pushed ’em. The reaction of the rest of the group feels genuine, because moments of screaming panic feel real, rather than random histrionics for the sake of building tension.

Ritual also brings logic to the modern “no cell reception” cliche. Out in the middle of BFE Sweden, with nobody around for miles, of course there’s no reception. And when they hit the woods their compass doesn’t seem to work, adding a creepy bit of dramatic irony. As Eddie Murphy would say? GET OUT. But nope, they go in anyway. Thank goodness, because the chills that come later are brilliant.

As the fellas continue on and on, they bed down for the at an abandoned house. Yep, it’s the idea of the pushiest pals overruling common sense again, with the leery friends following along. Fantastic buildup of dread, with each friend experiencing nightmares, then waking up to find themselves not anywhere near okay. And the scene in the abandoned house is absolutely chilling.

As everyone starts to get tired and spooked, shit gets real. One character desperately clings to a normalcy that obviously doesn’t apply. Another seems to glumly accept his fate. Yet another thinks everything will be okay if only they just get it together. And the fourth is mired in guilt and fear, trying to decide if his tortured psyche is playing tricks on him. This ensemble cast really brings their A-game here, and their talent lifts up an already competent and creepy story. Speaking of A-game, the monster is absolutely unique in horror. It’s huge, terrifying, and yet intimate. It’s a claustrophobic horror in the middle of the wild open nowhere. I’d say more about the how and why of it, but I don’t want to spoil anything beyond what I’ve already hinted at.

There’s a running thread of trying to distinguish between what’s real and what isn’t in Ritual. I like to think that everything is real in its own way. Movie fans that like their storylines laid out simply may end up irritated, but I thought this use of dream imagery, nightmares and strange shocks blended perfectly with the stressed out minds of the main characters. Thanks to excellent work by director David Bruckner (V/H/S, “Amateur Night”) and a killer screenplay by Joe Barton (Humans), things never let up ’til the cathartic final few minutes. Hard won, y’all. But man it’s worth it.

Striking a few points off for a soundtrack that’s effective, but way too damn loud in parts.  I had to adjust the volume of my TV a few times due to the shift in levels. Still, a 98 out of 100 ain’t bad.

Professional nerd. Lover of licorice.
View all posts by Denise →
This entry was posted in 31 in 31, In Horror, Movie Reviews and tagged 31 in 31, Horror Movies. Bookmark the permalink.