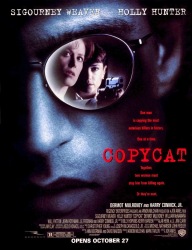 Story: A psychiatrist becomes agoraphobic after an attack. But when murders plague San Francisco, a police investigator asks for her help.

Splat factor: Mostly photos of kills, some blood and after-effects of attacks.

Closing scene “shocker”?: Yeah, and that’s a helluva  bummer because everything wraps up nicely til then. This  “twist” is just silly sequel bait.

Remake, Sequel or OG (Original Ghoul)?: Original, though it harks back to historical killers.

Trick or Treat?: Felt like a bit of suspense this time around, so serial killer story it is! Dr. Helen Hudson (Sigourney Weaver) and Inspector MJ Monahan (Holly Hunter) are interesting characters, though Monahan gets the short end of the development stick. Don’t get me wrong, they’re both much better than the usual thinly drawn stuff, and both actors deliver amazing performances. But Monahan is a collection of hints compared to Hudson’s much deeper dive into the after-effects of trauma.

Crooner Harry Connick Jr. plays against type as a Hannibal Lecter-esque psychopath, and as with Silence of the Lambs, things end with a solid possibility of a sequel. Unlike Lambs, it’s one that felt tacked on at the last, by studio execs wanting a bigger payday. This end scene robs the film of any real satisfaction, and leaves a tacky taste in the mouth.

So do yourself a favor and watch til the end of the climax…and then cut it off. You’ll get all of the fun thrills, with none of the desperation. You’re welcome.