“Rescue Me” gets a collector’s set Blu-Ray release 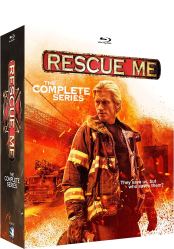 Rescue Me was one hell of a compelling show, and comedian Dennis Leary more than proved his acting chops as firefighter Tommy Gavin. Now Mill Creek Entertainment gathers the entire series into one super-deluxe Blu-Ray set, and I’ll admit I’m drooling. Okay, I’m also setting aside Kleenex, as this show runs the gamut of emotions. Plus, who doesn’t want a Dennis Leary commentary track? You know that’s gonna be gold.

If you haven’t seen it yet, go forth. And if you’re a fan? Well, you’ve probably already ditched my page and hopped over to Amazon. I’m not mad.

Read on for the full details!

For the first time ever, all seven seasons of the Emmy® and Golden Globe®-nominated Rescue Me are available in one complete Blu-ray box set Mill Creek Entertainment.  From series creators Denis Leary and Peter Tolan, the highly acclaimed Rescue Me galvanized audiences with its uncompromising portrayal of the New York City firefighters of 62 Truck, whose duty to save lives puts their own in constant turmoil – on the front lines, in the firehouse, and at home.  This complete, 16 disc special edition Blu-ray set is now available with an MSRP of $149.98.

Leary is electrifying in his role as Tommy Gavin, a deeply driven first responder with a combustible personality and personal demons to match. Through seven groundbreaking seasons, we follow his gripping story, along with those of his fellow crew. Provocative, profane, dramatic, humorous, and unflinchingly honest, it is an unforgettable journey of courage, conflict and ultimate salvation.

“This unflinching, darkly funny tale of fires and firefighters is one of the most underrated shows in recent years. Its subject matter is undeniably fresh, fascinating and full of danger: the problems of readjusting to everyday life as a New York firefighter after the devastation of 9/11.”  – Sarah Hughes, The Guardian

Mill Creek Entertainment is the leading provider of value home video content to the retail and specialty marketplaces.  With over 50 million DVDs and Blu-ray discs sold annually the company has established a powerful distribution network that encompasses over 30,000 storefronts and millions of online customers. The company is relentless in its quest to always provide outstanding content and packaging with amazing value propositions to ensure consumer demand and customer satisfaction. Mill Creek offers a tremendous range of content including contemporary and classic feature film and television, kids’ animation, documentary, special interest and fitness.  Compilations range from double-features to 250-movie collections as well as 10 to 600 episode TV collections.   Driven by its immense library of over 20,000 hours of owned and licensed content and licensing partnerships with major studios and production companies world-wide, the company continues to redefine the value marketplace.  For more information: www.millcreekent.com.

Professional nerd. Lover of licorice.
View all posts by Denise →
This entry was posted in Streaming Things and tagged Blu-Ray, TV. Bookmark the permalink.