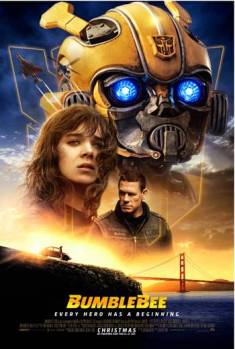 Nutshell: Though Spielberg and Bay are both producers on this revamp of the series, this story is definitely more Steve than Mike. And thank Unicron for that. By creating characters worth caring about (including Bee) and a compelling story that goes beyond chase-and-boom, this film has heart, soul…and explosions. Great work by Stanfield – working with all that top-notch CGI couldn’t have been easy, but she makes it look effortless. Grade: A

“You’re actually talking! And you’re listening to The Smiths!”

Okay, it’s Awards Season and there’s a glut of screenings between December holidays, so let’s do this fast! (Or fast-ish.) Bumblebee is really good. Like, “oh man this is what I was hoping for with a Transformers movie” good. “Left that Michael Bay directed schlock in the dust” good.  “Holy crap I can’t  believe I just gave a Transformers movie an A” good. But trust me; this is one movie where you don’t have to sheepishly tell your friends you’re going as a guilty pleasure. Go because it’s a compelling story that just so happens to have some awesome action pieces.

The year is 1987, and Charlie Watson (Hailee Stanfield) is getting ready for her 18th birthday. Still reeling after the death of her father a few years before – though her mother (Pamela Adlon) has remarried and her younger brother seems to have rolled with the changes – she hopes for something every California girl wants. That’s right, a car. #NobodyWalksInLA But even though she’s been working on a vintage ‘Vette (a project she started on with her dad), things aren’t going so well. Then one day after digging around in her Uncle’s car graveyard/parts wonderland, she stumbles on an old forgotten VW Bug. It’s love at first sight, but when she gets her new (to her) car home, she finds much more than she’d bargained for. But her new Autobot pal has a mission…unfortunately, he can’t remember what that is. Or that he’s even got one.

Bee gracefully weaves the twin storylines of a girl trying to come to grips with her father’s death and the Autobots trying to find a new home. Credit that to screenwriter Christina Hodson, whose work here makes me doubly excited for the Birds of Prey film coming in ’20. Hodson does such a wonderful job balancing these two stories that I find it damn near impossible to figure out why the Bay Transformers movies (I Will Not Call Them Films) were little more than Boom Boom. This engaging (dare I say compelling? I dare.) story gets an extra boost by director Travis Knight’s delicate touch with the automotive aliens. As with Kubo and the Two Strings and Coraline, Knight focuses on the human protagonist, keeping the unreal elements firmly grounded by Charlie’s worldview. Bumblebee is more than a metal alien; he’s a friend. Decepticons Shatter (voiced by Angela Bassett) and Dropkick (vb Justin Theroux) are just uber-powerful aliens with tech the government wants by any means necessary. Yeah, they transform. Sure. But Bee digs into the why of the human characters motivations, rather than just throwing bodies into action scenes.

Then there’s the refreshing change of pace from the usual Transformers girlie eye candy and insta-romance between the male lead. Charlie is very much a beautiful girl, but she’s not simply fanboy service; she’s a person who wants to do what’s right, even though she kinda knows she’s way out of her depth. Her heroism and loyalty is front and center, not her…headlights. (BTW, I love her 80s fashion, even though I know for a fact that back then band shirts never fit that good unless you took a needle & thread to ’em.) Oh, and her makeup runs when she exerts herself!  Yeah – like a real flesh and blood human instead of a wish fulfillment fantasy! It’s a small thing, but to this gal, it’s huge. Bravo.

Speaking of headlights, the only quibble I have in this film is the portayal of female Transformers. Yes!  They’re here! Arcee in the house y’all! (Okay, not for long, but she’s here!) And so is Shatter, though having her transform to her Decepticon form with literal headlights where her bajoobies should be? Pulled me out of the story every now and then, because c’mon now, that’s so on the nose it’s almost painful. Yeah, I know that’s how she’s drawn. But it’s still humorous in an uncomfortably tacky way. That said? Damn y’all, that CGI. It’s absolutely incredible. ILM has gone above and beyond with this film, and even the human-‘bot interactions look more genuine than I’ve ever seen them. So I’ll give the headlights a pass. Plus, I don’t want anyone to think I’m dissing Bassett’s headlights. I’m not. They’re fabulous.

Bumblebee himself is a fully, er, metaled-out character himself. Voiced (when not using radio snippets) by Dylan O’Brian, Bee loves The Breakfast Club, hates Rick Astley (sorry my guy) and has a winsome eagerness to please that’s adorable. He’s also quite the bull in a china shop, and ILM manages to make this Autobots every stumble, cringe and act of bravery feel human. Hey, I mean that as a compliment.

Story, CGI, performances…oh, the cinematography and set design is glorious as well. Charlie’s garage looks believably lived-in, and her tools look like they’re lovingly used. Two more things. One: pay attention, long-time fans. There are tidbits aplenty (and don’t grab your coat when you think the film is wrapping up. Trust.) Two: dat soundtrack! Baby, you’re gonna dig it. Hey, why don’t I play us out with the 80s favorites I heard in the film, along with Bumblebee‘s new song by  Hailee Steinfeld, “Back to Life”? (And let me know if what I’ve missed…) Here ya go – enjoy!