Game of Thrones Season 8: A Song of Idiosyncrasy and Furor 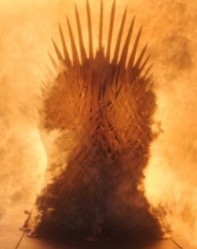 Beware: this review is dark and full of spoilers. As this is a critique, I’m assuming you’ve watched, so there’s plenty of specifics here. You have been warned.

Here we are, walking through the smoking wreckage of Game of Thrones. We’ve had seven seasons filled with almost every emotion possible; some moments were excellent, some simply got us to the next point, and a few that were downright exasperating. Season 8 is all of that, writ in six episodes.

But while there’s a lot to enjoy in this last season for fans who’ve stuck through it all, showrunners David Benioff and D.B. Weiss (herewith shortened to D&D because I’m lazy) made it obvious that they’d had just about enough of Westeros, wrapping things up at breakneck speed. Character arcs that took seasons to achieve were dashed in a single moment. Foreshadowing took the place of development to try to explain away abrupt shifts in a character’s worldview and/or moral compass. Moments that were supposed to be huge payoffs ended up as little more than ‘well, that just happened – on to the next thing’. The cast and crew – and of course the fans who’d been on this ride for eight years – deserved better. So grab some wine or sour goat milk and let’s dig in, shall we?

First, the undeniably good. Every single performer in the cast gave 110% this season, and it shows in every word, glance and action. From Brienne’s tearful joy at her knighthood to Jamie’s final moments, we all need to take a moment to appreciate the immense talent this show brought together. While Peter Dinklage deserves this season’s MVP award because hot damn he got a lot to work with and did some of the best work in his career, each and every character got an actor that gave a damn about where that character ended up and why.

I’m gonna miss this show for many reasons, chief among them that I’ll never get to see this cast work together like this ever again. I have hope that eventually I’ll see Maisie Williams and Sophie Turner do X-Men like stuff together someday. But while that may be fun, it won’t be the same as seeing them thoroughly inhabit Arya and Sansa. Ditto for Alfie Allen and Gemma Whelan as Euron and Yara Greyjoy, Liam Cunningham and Carice van Houten as Ser Davos and the bane of his existence Lady Melisandre, and, of course, Nathalie Emmanuel and Jacob Anderson as the shows OTP (I am correct in this) Missandei and Grey Worm. I could go on and on. But you get the drift.

More good? Gotcha. The cinematography was beyond amazing. Yes, even in Episode 3, The Long Night. For the record, I had a tough time seeing through all the darkness in that episode on my first watch. But the next day, after the throng of streaming fans ebbed, it was all crisp and clear…if a bit dark. Hey, it’s a night battle. Then there’s the CGI, especially regarding the dragons. And holy blip Drogon’s climactic moment when he torches the Iron Throne is absolutely breathtaking to watch. The colors, the flow of molten metal, and the power of Drogon is stunning. The set design and costuming are amazing; they showed us all of Winterfell! Sansa’s coronation gown! The Stark Library, where Arya does her best to avoid the wights! Even the gritty horrors of King’s Landing after the battle are strangely beautiful, because the attention to detail is fantastic. Sure, there are bits where things went wobbly in the middle. Starbucks, anyone? Maybe some water?  But who really cares; I didn’t notice ‘em at first, and with HBO erasing them, they’re gone now. Did I giggle when I found out about these gaffes? YOU BET. But meh. That’s the least of this season’s problems.

No, the biggest problem in this final season is the way things got rushed through. Jamie Lannister took seven seasons to go from a man who knew he was all that and a bag of golden chips to someone who understood humility and real affection, but then chucked it all in less than five minutes because…dammit we need to get him back to Cersei for the endgame.  No, no we don’t. It would have been much more poetic if Cersei had died all alone, seeing exactly what her machinations had gotten her. But nah. She got to die in her brother/lover’s arms, with Jamie cooing about them being the only two people that matter. Uh, Brienne? You’ve been sleeping with her, and wanting to start a life with her in the North? What the hell, D&D?

And then there’s Dany. Daenerys. Mother of Dragons, Breaker of Chains…Goer of The Crazy. In the penultimate episode, The Bells, Dany goes from a character who’s been seriously concerned about turning into her father and wanting to avoid that at all costs…to someone who willfully burns King’s Landing to the ground, including just about every single man, woman and child. She could have torched the Red Keep – killing Cersei, the Queen who’d killed Dany’s BFF Missandei – but nope. Dany steers towards the keep, but instead orders Drogon to torch every street and byway. Yes, later she tells Jon that “[the small folk she torched] supported [Cersei]!” But Dany knew the small folk were pawns. Same goes for Grey Worm. Yes, he lost the love of his life thanks to Cersei. Yes, he was pumped for revenge and trained all his life as a killer. But his softening (thanks to Missandei) is completely dashed once Dany lights ‘em up. I understood this more than the other shifts, but this felt too obvious. Shades of grey (ahem) would have done wonders -especially as he takes the Unsullied to Missandei’s peace-loving home of Naath after all’s said and done – but again D&D dropped the ball.

And don’t get me started on all the “But FORESHADOWING!!!11!”that I’ve seen trotted out as an excuse for wacked-out character shifts. Foreshadowing does not make up for a lack of character development. Yes, Dany got a crazy-eye look here and there, and she’s always one to get her kiddos to flame-on if bad guys try to get the best of her. But up until Bells, she was selective in her retribution. Slavers got slaughtered because they’d crucified countless children to show Dany that they were tough. The Dothraki Khals who crudely dismissed her got torched because they’d treated her like sexually available garbage. She had a standard operating procedure of doling out karma…but what was the karma in Bells? It was a sudden shift that revved up her crazy from 8 (let’s face it, nobody’s zero crazy) to 8,000 in less than a minute. And it could have been fixed by letting Dany hear Missandei’s final word – ‘Dracarys’ – in her mind. Nah, better to just let Dany go full twang at seemingly the drop of a hat.

Then there’s all the plot armor. Y’know, the invisible shield that protects main or popular characters from harm, no matter what odds they may be facing? Arya’s survival of the Battle of King’s Landing is a prime example. Girlfriend is a lethal assassin, but how many falling buildings and gouts of dragonfire can any one person survive? Well, if you’ve got plot armor, every single one. She even gets a magic pony to ride off on when all’s said and done. But she’s just one instance of plot armor saving the day; the main cast was covered in it during Night. I’m a hypocrite though; Ghost survived Night and only lost an ear. And I’m okay with that. Good boi, Ghost. Good boi.

I can’t imagine the actors were happy about record-scratch shifts in their characters, and if you’ve been anywhere near social media you know the fans weren’t pleased either. I can only assume that D&D were so sick of this story that they gave up on trying to have things make sense. If the show had been given a full season’s worth of episodes, and been allowed to develop these twists organically instead of shoe-horning them into the narrative for the sake of wrapping things up? Season 8 would have been absolutely astounding. Would I have liked the shifts in characters, or sudden plot twists? Maybe not so much. But I would have understood why those things happened, and respected them.

Now, much like any other survivor of King’s Landing, I try my best to sift through the wreckage and come up with bits and pieces that were unscathed by the destruction. I’ve found a very nice pile of moments. It’ll have to be enough.

Professional nerd. Lover of licorice.
View all posts by Denise →
This entry was posted in HBO, Streaming Things and tagged #GoodBoiGhost, Game of Thrones, TV. Bookmark the permalink.