A little something for All Saints Day… Originally published in 2003 at The Green Man Review! 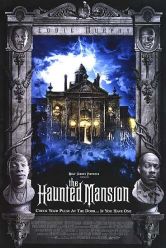 Ghosts. You can’t live with ’em, you can’t just throw ’em out on the street.

Jim and Sara Evers are husband and wife. They are also the sole employees of Evers & Evers real estate (their sales line: “we want our clients to be happy for Evers and Evers!”) The problem is, Jim can’t seem to leave work at the office, so his wife and two kids, Michael and Megan, are alone on almost every important family function. When Sara gets a call asking her to visit a stately manor with the intention of listing it as a sale property, Jim jumps at the chance, even though it coincides with their weekend at the lake.

As any character who has lived through a horror movie can tell you, heading to your original destination is a much better idea than taking any detours or quick visits. But Jim drives his family to Gracey Mansion, where the current owner, Master Gracey, wants to move on, but is worried that tragic events from the past may still linger, cursing the house. Before you can say Amityville Horror, strange things start happening to Jim and his kids. And before you can say Dracula, they find out that Sara is the spitting image of Elizabeth, the beloved fiancee of the former(?) Master of the house. It is up to Jim, Michael and Megan to break the curse of Gracey Mansion before it claims another victim.

As with the 2003 summer blockbuster Pirates of the Caribbean: The Curse of the Black Pearl, this movie is based on a popular Disneyworld ride. This being the second film based on a theme park ride, I couldn’t help but wonder what the next one would be. Perhaps “It’s A Small World: The Musical”, or “When the Hall of Presidents Attack”? The mind boggles.

Eddie Murphy is up to his usual family-friendly shenanigans in this film, but ever since Shrek, whenever he uses his overly earnest voice, all I hear is Donkey. Here, as Jim Evers, a man who seems to put success above everything else in his life, Eddie puts his facial muscles to good use conveying false sincerity, amazement and fear. But the movie spins too fast to let you really latch on to anything more than what’s on the surface, and that’s disappointing. His first stand-up album where he discusses horror films is a much funnier, better written piece.

Terence Stamp, as Ramsley the butler, is far removed from his excellent work in The Adventures of Priscilla, Queen of the Desert. Here, he is given little to do past holding a candlestick and making sure his deeply shadowed makeup is on correctly. Jennifer Tilly pulls off being a cryptic but lovable crystal orb pretty well. And as Sara, Marsha Thomason is asked to do little more than act sad. She does put on an amazingly realistic American accent, though.

The main reason the cast doesn’t have much to do is pretty obvious from the moment the Evers first step foot on the grounds of Gracey Mansion. Disney wants to pack in as much as they can from the theme park ride into this movie, so the movie concerns itself with the next big moment, rather than the development of the story or theme. And if judged on this point alone, the movie delivers. I won’t go into details that haven’t been in the widely shown theatrical trailers, but viewers who have been on the ride will spot familiar things everywhere they look. I just wish they had kept the scenes with singing barbershop statues to a minimum, because they wear out their welcome very quickly. A few quips are cute, but after that I felt myself flinching and checking my watch. For folks that aren’t familiar with the ride, they may be downright annoying.

With all the money Disney so obviously threw at this movie, plot development definitely got the short end of the stick. As it is, it feels like a warmed-over “love transcends the grave” tale, with cute kids and scary zombies thrown in for good measure. Stir it up, keep it loud, and everyone will think they’re watching something really cool.

Why did I sit through it? Production design, art direction and cinematography. Lighting is used to create shadows and fire, sounds grab you and bring welcome bits of life to the otherwise routine action. The opening credits, cutting titles and names in between scenes of the house in its prime, are especially effective, and beautifully edited. Even the musical score pokes fun at the horror genre, toying with the theme from Friday the 13th. Yes, this film is based on a thrill ride, and Disney has had years of developing and running that ride in order to get the look and feel of this movie right. But the hard work of the folks behind the scenes still shines through.

Mona May’s costumes and Rosemary Brandenburg’s set decoration come together to contribute a feeling of lush antebellum decay. It really works, but just like amazing sets used in the 1999 remake of The Haunting, they overshadow the story itself. I sat back and basked in the glow of such superb work, but viewers who aren’t so easily swayed by the finer points of design may not be so moved.

Rick Baker and his Cinovation Studios outdo themselves in this movie. Previous effects along these lines, like his zombies from Michael Jackson’s Thriller, are upstaged by these more advanced decrepit, rotting images. But this scene felt like a brief time-out designed to showcase Rick Baker’s work. It is impressive, but the out-and-out horror felt out of place in what is supposed to be a family film. Evoke Night of the Living Dead all you want, but make sure it’s appropriate to the audience you’re selling your film to.

The Internet Movie Database lists this movie as a comedy/horror/family/fantasy. The Disney site calls it a “fun-filled, fright-packed comedy adventure.” But by trying to play to too many markets, Disney has bitten off more than it can chew, resulting in an uneven comedy that may be inappropriate to the family viewers it tries to win over. It’s hard to figure out who this movie is for, exactly. It’s much too scary for youngsters, and even older children may be frightened by the intensity of some of the scenes. But at times it can be too silly and predictable to sit through for teens and adults.

This is a lovely film to look at, but there’s not a lot of substance. Just double-check to make sure any young children you take are up for a pretty good scare.