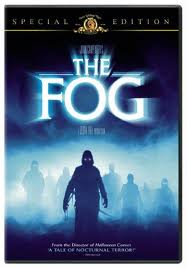 Story: “Get inside and lock your doors,  close your windows! There’s something in the fog!”  That’s not just the tagline for this movie, it’s the plot.  Seems over a hundred years ago, the six founding members of the town of Antonio Bay double-crossed a man who wanted to found a leper colony on a patch of land nearby, taking the man’s gold and luring his ship onto the rocks of the bay where he and his shipmates drowned.  Classy, right?  You’re not the only one to think so; the ghosts of those lepers have returned for some payback.

Splat factor: Did I mention John Carpenter?  Of course there’s blood. There’s some very pissed off spectres, and it’s clobberin’ time.  As with Halloween though, many of the action shots are cut away at the last moment (something moviemakers today don’t do.  Then again moviemakers today aren’t able to sustain the level of dread you feel in this film.  Winner: The Fog.)  Most of the action takes place in a nighttime fog though, so effects are bathed in a hazy afterglow. Kinda like a Barbara Walters interview.

Remake, Sequel or OG (Original Ghoul)?: This is the real deal. Don’t be fooled by the so-so 2005 remake.

Trick or Treat?: It’s caramel apple time; this is horror movie candy at it’s most welcoming. A truly spooky ghost story with elements of slasher. There’s a light touch of humor here too, with the characters banter keeping things fun but not too goofy before the real thrills start.  (“Sandy, you’re the only person I know who can make ‘Yes, Ma’am’ sound like ‘screw you'”.  “Yes, Ma’am.”)  Plus, the all-star horror cast.  Janet Leigh and her daughter Jamie Leigh Curtis working together; something that didn’t happen again ’til 1998’s Halloween H20. Carpenter regulars Tom Atkins and Nancy Loomis (now Kyes), as well as well known character actors Hal Holbrook, John Houseman, and a va-va-va-voom Adrienne Barbeau for 80’s fanboys.  The costumes, the music, the scenery, it’s all timeless, and that keeps The Fog just as eerie now as it was then.

Professional nerd. Lover of licorice.
View all posts by Denise →
This entry was posted in 31 in 31, DVD Reviews, Movie Reviews and tagged Classics, Halloween Movies, Horror Movies, The Fog. Bookmark the permalink.