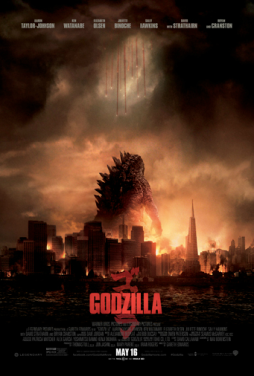 Nutshell: I give Godzilla an A-.  Much like the old King of Kaiju himself, Godzilla is a fabulous throwback to ancient times, when Toho studios was throwning down awesome monster-on-monster action, kids were never really in harms way, and SKREEE-ONK! meant that somebody’s bringin’ the pain, son.  The first half drags a bit, yes.  But all is forgiven with a second half that keeps the action loud and proud.

I’m a huge, massive kaiju nerd.  Blame it on the old Channel 20 Saturday morning movie fests (and nighttime Creature Features), blame it on the fact that my dad would never say no to me watching anything from Japan, or blame it on my horror-fangirl roots.  Either way, I love the big green guy, even when he’s saddled with sub-par storylines. *coughGODZILLA1998cough*  This time though?  Godzilla taps another kaiju addict, Director Gareth Edwards, to oversee things.  (Note: if you haven’t seen his excellent Big Monsters Rule The World film, aptly titled Monsters, get thee to Netflix right now.)  Edwards knows how to get the most out of the big guy, and fans of Big G will be happy to see that all the great ol’ chestnuts in his arsenal are represented: the roar, the swimming with his ridges above water, his ability to toss other kaiju like ragdolls, and his signature atomic breath.

Here’s the situation this time: 15 years ago, nuclear scientist guy Joe Brody (Bryan Cranston) and his lovely scientist wife Sandra (Juliette Binoche) are in Japan, working at a nuclear power plant, as nuclear scientists are wont to do.  Suddenly, pow!  Earthquake!  Before you can say Holy Kaiju Batman, tragedy strikes, leaving the Brody family (complete with little son Ford) rocked to it’s core.  (Get it?  Nuclear, core…fine.)  Present day, and the Brody men are dealing with things as best they can; Joe has gone full tilt tinfoil helmet, and grown-up Ford is a bomb tech for the Navy.  Of course, it’s not too long before the old nuclear plant site is rockin’ again…could it be something besides tremors?  Uh, of course it can.  But how will the world face this latest, huge, problem?  Cue Big G!

Godzilla (2014) — which I’m shortening to Godzilla for the rest of this review, because c’mon — takes the old, loveable clichés from G’s Toho Studio days and runs with ’em to glorious effect.  No wonder; “Toho Company” is listed as one of the production studios.  This means that things build slowly, which can leave some folks put off by the first hour drag.  I have to admit that I was one of those people for a bit, but then I remembered that with Toho, slow build = massive payoff, and I settled down.  Plus, during the first hour there’s plenty of fun, and nods to monsters past.  (Hint: take a good look at Ford’s devastated old room when Joe and Ford head back to the nuclear zone.  There’s a terrarium with a broken chrysalis and a name taped on the glass…and check out the name on a boat later in the movie.  And of course the MUTO website is tons of fun….)

Godzilla has some modern-day bits and pieces as well; there are parallels to the Fukushima Daiichi disaster, the 2004 Indian Ocean tsunami, and our post-9/11 fear of just about anything that we don’t understand.  (Or maybe that’s always been a thing here.  USA!  USA!)  Herewith, a list of stuff I adored:

* The opening credits sequence:  A blend of old historical nuclear test footage and inserted swimming-Godzilla footage aged to blend in perfectly.  Censoring bits and pieces as the credits flashed on screen was a perfect added touch.

* The FX and cinematography of the power plant disaster:  Young Ford, watching the devastation from his schoolroom window, is heartbreaking enough.  But that crisp, sharp focus on the buildings?  Well done.  Which brings me to…

* Cinematography:  Seamus McGarvey (The Avengers) manages to create a smoky, ash-covered dust bomb of destruction, and yet things are in-focus and crystal-clear.  This is the kind of work that tends to go unnoticed by most, as it’s “just a focused shot, isn’t it supposed to be?”  But honey, there are tons of films where the same type of scene would be difficult to comprehend through the mire.  Bravo, Mr. McGarvey.

* Monsters:  Yes, I say plural.  Anyone who has access to IMDb or the movie synopsis has to know that “restoring the balance” is code for monster-smackdown.  And there is, and it’s jaw-droppingly awesome.  G-dog throws down old-school, and these creatures are not simply items to be disposed of quickly.  They’re a definite challenge for our kaiju hero, and that’s what makes the finale so compelling.

* Monster design, or Why I Love Baggy Kaiju: the monster design here is part real-live reptile, part loving homage to the man-in-suit monsters of the classic films.  Watching the “skin” move loosely on G’s body gave me the happys.  Man in suit!  Not really, but still.  Bonus points for gills, a new twist on a beloved monster that just feels right.  How else is he gonna sleep down in the watery depths?

* As grown-up Ford, Aaron Taylor-Johnson has come a long way from Kick-Ass, and by “come a long way” I mean “PHWOAR he’s crazy hot”.  I kinda feel dirty saying that, as he’s in his twenties and I’m in my shut-up-already’s.  But who cares; bring forth the orange jumpsuit, I’ll happily wear it.

* Viva Las Kaiju!: Monsters.  You can’t keep ’em down on the farm.  And so there’s gonna be plenty of destruction, with Las Vegas being a perfect place to let the monsters rip up a lot of familiar-looking icons.  Oh, and don’t worry; San Francisco is reduced to rubble too.  My friends in SF may want to consider a move to Oakland.  Y’know, just in case.

* The Smartest Guy In The Film Award: goes to the bus drive on the Golden Gate Bridge.  If I saw a ginormous monster rise up out of the water, I’d keep driving ’til I saw Pennsylvania Welcomes You.  So I understand where you’re comin’ from.

* Bryan Cranston: I love him!  But without getting too spoilery, his magnificence isn’t put to it’s full potential here.  Okay, the first half of the film?  He’s awesome!  And that’s all I’m gonna say. (Ditto Juliette Binoche.)

* White Person Overload: the devastation hits Japan, and yet Ken Watanabe is the only Nihon-no in the house?  Fail.  Granted, he’s a favorite of mine.  But honestly y’all.  Yes, the action moves from Japan to San Fran & Vegas, but this kinda feels a bit like the reverse of 1954’s Godzilla, with Raymond Burr added in so American audiences wouldn’t snub a movie with all the yellow people.

* 3D: I didn’t see much in-your-face here beyond the typical monster mayhem  you’d get without it.  Granted, it’s probably a conversion thang.  IMAX/faux-MAX though?  Definitely worth the upgrade.

Okay puny humans.  Wanna see a monster show? If it’s this Godzilla, yeah you do.

Professional nerd. Lover of licorice.
View all posts by Denise →
This entry was posted in Movie Reviews and tagged Godzilla, Movie Reviews. Bookmark the permalink.